Goemkarponn desk
CALANGUTE: The entire village of Calangute alongwith NGO’s was up in the arms over the Urban area tag for the coastal village, which forced the panchayat to resolve not to allow the notification. But now it has come to the fore that the same panchayat had requested government to grant urban area status to the village.

Following State-wide criticism the Village Panchayat Calangute last week passed a resolution unanimously to write to concern authorities to de-notify Calangute as Urban Area.
Calangute Sarpanch Shawn Martins said that the villagers had several apprehensions and they communicated the same to our ward members.
“We also thank our Hon. MLA & Minister Michael Lobo, ZP Dattaprasad Dabolkar, all our Panchayat Members and various groups like Citizen Front etc for supporting the resolution,” he said.
The decision came after villagers and activists had demanded the State government to de-notify the urban status of Calangute village.

The villagers said that the urbanization would mean increasing the FAR to 200 to 300, increasing taxes, more outsiders taking over and other.
They said the ‘structures have come up in fields with 80 per cent FAR, 100 per cent FAR is given to builders for construction on hills and others’ which is start of urbanization.

Goemkarponn has laid its hands on documents, which will expose the lie of the Calangute panchayat.

The documents, which has the resolution taken by the same panchayat, which was then headed by Dinesh Simerpurushkar, resolved to ask State government to notify Calangute as Urban area.

The letter to the Revenue minister by then Sarpanch Dinesh S. Simerpurushkar said, “This resolution is issued only for the purpose of designating the village of Calangute as an Urban area and should not be construed to mean that the Village Panchayat of Calangute seeks to change the status of village of Calangute to municipal town or area. Therefore you are kindly requested to notify Calangute village as Urban area under section 2(38) of the Goa Daman and Diu land Revenue Code, 1968.”

TRANSCRIBED HEREIN BELOW THE RESOLUTION 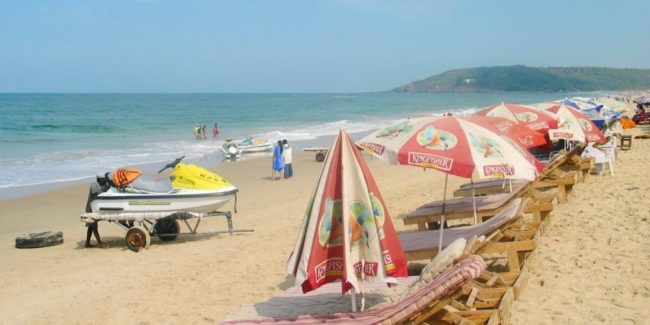 Seconded by: all present members

(a) Statutory Towns: All places with a municipality, corporation, Cantonment board or notified town area committee etc. are known as Statutory towns.

(b) Census Towns: All other places satisfying the following three criteria simultaneously are treated as Census Towns.

iii) A density of population of at least 400 per sq.km. for identification of places which would qualify to be classified as ‘urban’, all villages, which, as per the 2001 Census had a population of 4,000 and above.