Gaurang Prabhu/ Goemkarponn
MARGAO:
It is rightly said by George Washington “Agriculture is the most healthful, most useful and most Nobel employment of man.
But little do this idea appeal to the modern youth now a days as they seem to be disenchanted with agriculture and shunning it as a profession.
In an age where being an Engineer is much ‘cool’ than being a farmer, Varad Samant a young 29-year-old Goan youth from Dharbandora stands as an inspiration to many who confidently chose to be a farmer” rather than craving for any other white collared job.
He started agriculture on 2000 sq Mtr area with lady finger plantation.
“With a trial that yielded success, motivated me to take up farming at a larger scale with more crops like chilli, watermelon, cabbage, alsande (kidney beans)”, says Varad
“My turning point in my small agricultural career came when I succeeded in proving the idea as a myth that carrot crop cannot be grown in Goa, but took it up as a challenge .With practical knowledge of agriculture at my hands and a deep study, went for carrot cultivation, which was not only grown for the first time on Goan soil but also yielded a huge success. I never looked back since then, I continued with implementation of my innovation and creative ideas in the field of agriculture,” Varad reveals.
Talking about his new innovations, he adds, “we use drip irrigation technique, which is unique in its own way because not only does it requires less water but also distributes water evenly to the entire plantation. Also cutting down on time, labour energy as well as many other cost inputs.” 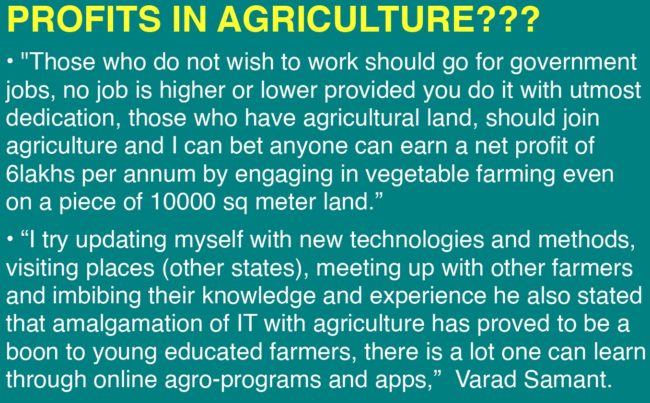 When asked about, what is the key to your success, Varad proudly says “unless you keep yourself flowing with change, you become stagnant”
“I try updating myself with new technologies and methods, visiting places (other states), meeting up with other farmers and imbibing their knowledge and experience he also stated that amalgamation of IT with agriculture has proved to be a boon to young educated farmers, there is a lot one can learn through online agro-programs and apps,” he continued.
Asked what message he would like to give the youths who are fascinated by government jobs, he replies, “Those who do not wish to work should go for government jobs, no job is higher or lower provided you do it with utmost dedication, those who have agricultural land, should join agriculture and I can bet anyone can earn a net profit of 6lakhs per annum by engaging in vegetable farming even on a piece of 10000 sq meter land.”
To a query how he intends to go about in next five years he says he would feel lucky and proud if he is able to inspire and create atleast 10 more Varads into agriculture into coming years and be a contributor to Dr Pramod Sawant’s ideologies of Atmanirbhar Bharat and Swayanpurna Goem.
Last year he have supplied around 70 lakh rupees vegetables to Horticulture department. After that CM Pramod Sawant along with PWD minister Deepak Pauskar visited farm of Varad Samant and praised him for his hard work.
CM in his many speeches did mentions Varad as an example before youth recently Varad had another successful experiment of cultivating red lady finger which is technically named kumkum in round 2500sq meter area and nearly got crop upto 2 to 3 tones now he has watermelon which will go to nearly 40 tones.
To sum up, agriculture today requires both brawn and brain in addition to enthusiasm and entrepreneurship which only youth like Varad Samant can provide.
We salute the spirit of this young ‘Agripreneur’ driven by a knack to think out of the box.