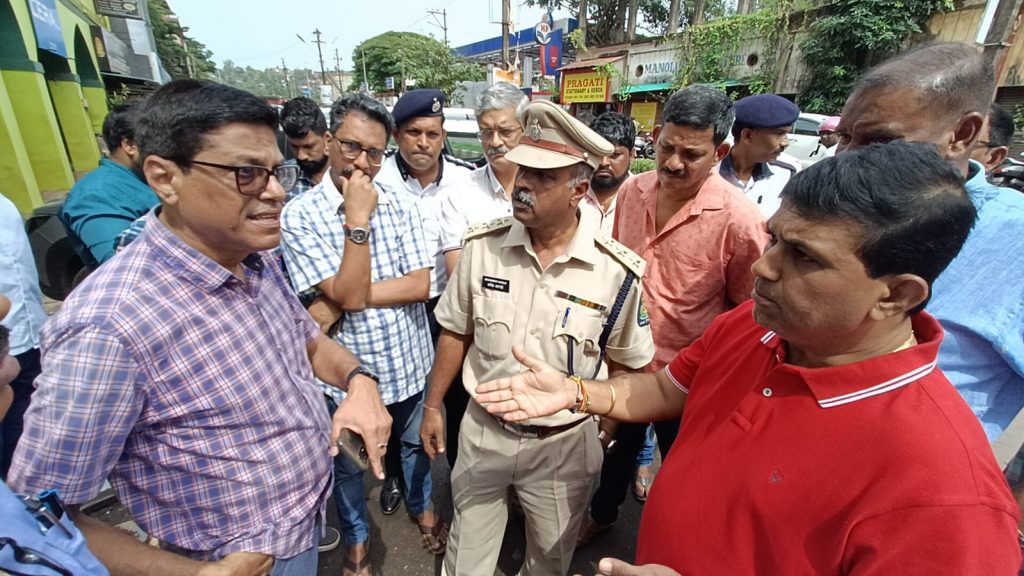 Goemkarponn desk
VASCO: Vasco MLA Krishna Salkar, on Tuesday morning, conducted a joint inspection of the ongoing work of the Ramp connecting the highway to the city along with officials of Gammon India, National Highway Authority officials, and PWD officials near Bagayatdar Bazar Vasco. The Traffic DySP Dharnesh Angley, Vasco traffic PI Shailesh Narvekar, MPT officials, MMC Chairperson Leo Rodrigues, environmental activist Adv Savio Correia and Social activist Sanjay Redkar were also present for the inspection
After a brief inspection, Salkar had a detailed discussion for over an hour where various suggestions were offered, and many alternatives were provided to Salkar and the other officials.
Salkar finally said that he would take up all the suggestions with the CM Dr Pramod Sawant and convene a joint meeting at the Government level with all the stakeholders of the 4 lane flyover port connectivity project and assured that the public suggestions, grievances and opinions would be placed before the CM for discussion.
“I had already received the proposal and seen the plans of the Ramp on paper, but I insisted that the ground reality needs to be checked, and hence I asked for a physical inspection at the site. Secondly, I wanted active participation of the residents of Vasco to receive their feedback and suggestions or objections if any and I invited social activists and environmentalists for the joint inspection as well. We even invited the traffic department so that they can place their point of view during the joint meeting,” said Salkar.
“We have seen the dimensions, and it fits the criteria, but the DySP Traffic is sceptical about the traffic movement, and we are now exploring other options of connecting the Ramp to the city from other locations. We will convene another joint meeting with the CM and MPT chairman, PWD and NHAI and see all the options and adopt the option which is best for the city because we cannot demolish the Ramp after it has been built. We will take all aspects and stakeholders confidential before we arrive at a decision,” said Salkar.
Environmental activist Adv Savio Correia thanked Salkar for inviting activists to have development by consent.
“He has taken all our opinions, and we have expressed our concerns and also provided alternative suggestions, and while we are not against having an exit from the city, we are only worried about the alignment of the Ramp. We feel that other stakeholders like MMC, MPDA, business houses must also be taken into confidence, and the project must be developed by consent,” said Correia
“We have given alternatives like using the exit from the already present ramps under construction near the MPT Ground Baina, or else the ramps can be connected to the highway from berth no 11 up to TB Cunha Chowk, which could be an alternative alignment. We also suggest that the Ramp can land near the IOC Junction, and we can look into technical feasibility, and decisions can be taken in the best interest of Vasco,” said Correia.
Traffic DySP Dharmesh Angley said that the original suggestion was the landing of the Ramp near Bagayatdar bazaar on FL Gomes Road.
“I do not recommend this because it is a very busy junction, and we have proposed that the Ramp can be moved slightly ahead on the same road near the Vasco police station. Secondly, we wanted to check if the width of the Ramp and the service road is possible without affecting the existing system in the well-planned city, and many feel that we must not alter this existing system.” said Angley.
“There are also suggestions that heavy traffic can move through Swatantra Path while we are constructing the Ramp, and this is not recommended because heavy traffic moving on a narrow stretch of Swatantra path will create a mess and traffic chaos for us. We will place all the suggestions together and find a proper solution after taking into consideration various aspects that could affect the traffic flow in the city,” said Angley.