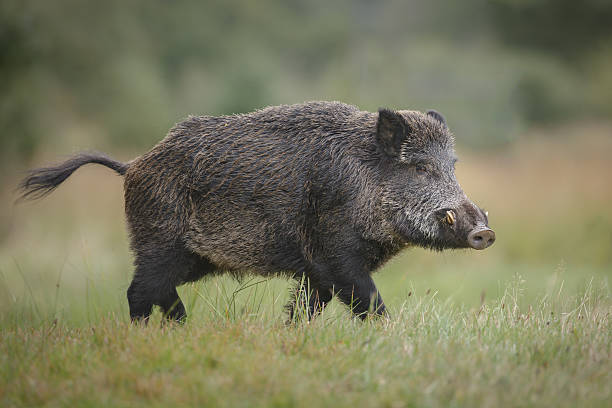 Goemkarponn desk
PANAJI: The Conservator of Forest, Govt of Goa, has allowed hunting Wild Boar with permission from dept.
The decision was taken considering the large scale losses to teh farmers caused by the Wild Boars.
The order issued by Santosh Kumar, Conservator of Forest, says the killing would be allowed with conditional permission from the Dy Conservator of Forests.
Following is the content of teh Notification:
Following is the prescribed procedure to be followed by Authorized Officer i.e Deputy Conservator of Forest North & South Goa Forest Division declared as Wildlife Warden under Notification No 2-12-72-LSG(Part) (V), Dated 30/09/1974, who have been delegated powers of Chief Wildlife Warden under Section 11(1) (b) of the Wildlife (Protection) Act, 1972 to issue permission for hunting of Wild Pigs which have become dangerous to human life and property including damage to Agriculture / Horticulture crops on private cultivated lands only and not in any Protected Areas, Reserve and Unclassed Forests:
1. Action to be taken only on a written complaint in the format prescribed by Forest department, to concerned Wildlife Warden by an individual/farmer specifically indicating the reasons for the permission sought.
2. After receiving the written complaint, Wildlife Warden will direct the concerned Range Forest Officer /RFO (along with individual/farmer, village panchayat Panch / Sarpanch) to visit the site/location for investigation, assess the situation and draw a Panchanama. If the situation warrants, removal of the wild pigs, the recommendation to that effect shall be detailed in the Panchanama,
3. The RFO will submit a detailed report to the concerned Wildlife Warden to seek permission to remove the concerned wild pig.
4. Wildlife Warden’s permission will be accorded based on the merit of the case in favour of a person having a rifle with a valid licence. The permission accorded will be for a specific period, site-specific and will be non-transferable.
5. No permission will be granted to hunt wild pigs in any Protected Area or Government Forest Area. The permission shall be issued only on private cultivated lands. No permission will be granted for removal of squeaker and juvenile.
6. Copy of Permission is to be given to all concerned
7. For the purpose of removal of Wild pigs, the individual/farmer shall take services of the shooters, who are available for the purpose and have a license for possession of a firearm. The person identified should be an expert shooter and own a powerful fire arm capable of clean removal of Wild pigs.
8. It is desirable that a valid Licensed rifle of Caliber 7mm and above / .12 bore gun with appropriate cartridge may preferably be used to remove Wild pig for which permission has been granted under Section 11(1) (b)of the Act. Use of any other type of Fire Arms / Ammunition (Lead Balls, pellets etc), and no any other means of culling, such as traps or poison, would be allowed in order to avoid removal/killing of non-targeted / herd animals
9. While removal of Wild pig/s for which permission has been granted by the Wildlife warden, care should be taken that no other animal, human beings are killed or injured and no property is destroyed or damaged.
10. The responsibilities for casualties/fatalities and loss to human or property caused knowingly or unknowingly during the process of removing of Wild pigs shall only be on the person /persons who is /are authorized for culling the Wild pig/s. The Forest Department shall not be responsible for any such act/incidence. An undertaking, in the format prescribed by Forest Department, in this regard will be given by the individual/farmer at the time of submitting a written complaint to the Wildlife Warden concerned
11. The carcass of Wild pig/s removed will be Government property, and it should be disposed of as per the legal procedure laid under Wildlife (Protection) Act, 1972 for Schedule animals. Drawl of burial/disposal panchnama by the Range Forest Officer in the presence of Panchas / Sarpanch and one NGO member / independent witness is a must. No part of the removed wild animal like meat, skin, tushes, trophy etc. will be consumed, possessed or displayed by any person. In case of any violation, penal action as per relevant provisions of the Wild Life (Protection) Act, 1972 will be taken against the concerned. Copy of Panchnama to be submitted to the Wildlife Warden immediately who in turn will submit a monthly report to Chief Wildlife Warden.
12. The powers delegated by the Chief Wildlife Warden to Wildlife Warden to permit hunting of Wild pigs shall be valid for a period of one year from the date of issue of the Notification.
13. The Authorized Officer, i.e Deputy Conservator of Forest North & South Goa Forest Division, may cancel the permit at any time if a permit holder violates the provisions of these rules or Wild Life (Protection) Act, 1972 as amended time to time.
14. The Chief Wildlife Warden may amend, modify, cancel or revoke any permit issued or ordered by the Wildlife Warden