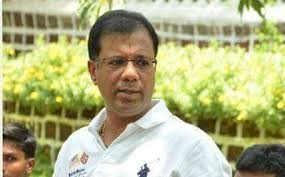 PANAJI: Valpoi MLA Vishwajit Rane today has sparked-off another controversy after the media questioned him about the possibility of his name coming forward for the Chief Minister’s post.
“Please don’t ask me faltu (useless) questions; you all can ask the BJP central leadership; I came here to pay my respects to the tallest leader of Goa, Late Manohar Parrikar,” said Rane speaking to media.
Rane’s visit to Goa Governor P. S. Sreedharan Pillai at the Raj Bhavan set speculation of him eyeing the Chief Minister’s post and his alleged rivalry within the BJP with Sawant.
Miffed at the media scrutinising his every move, he retorted on Twitter late on Saturday that everything isn’t political while tagging a local media channel and a national English broadcast news channel.
Confirming the visit, the former Goa Health Minister and MLA-elect from Valpoi constituency clarified that his call on the Governor was purely personal and not political”.
He had said, “Sad state of journalism…where a personal visit to His Excellency Hon’ble Governor of Goa has been made [into] such a stir. It was solely a personal visit to invite him to my constituency and take his blessings following my victory in the Assembly election,”