On the occasion of the World Earth Day, 30 Save Soil Volunteers rode through Goa spreading the message of #SaveSoil movement 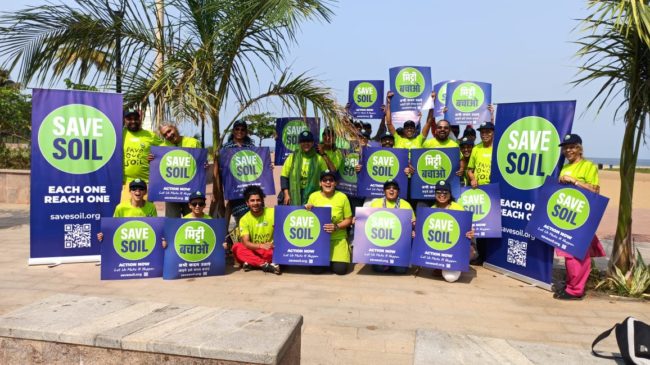 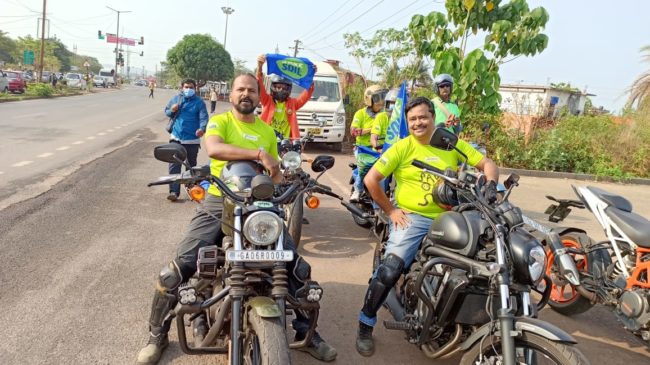 They stopped at the heritage Margao municipality office building and sang and danced to catchy tunes. They then rode through Vasco sharing details of the worldwide Save Soil movement championed by Sadhguru, founder of Isha Foundation, and why it is important to take action now. The Save Soil movement is fast catching up worldwide since it was launched on 21 March 2022 in London as a 100 day long lone-bike journey by Sadhguru.
Sadhguru, while conveying his “best wishes to all the Earthlings” on Earth Day, said that the potent power of rich soil, which is responsible for fertile earth and water security and clean air, is in grave danger. He urged citizens of the world to raise their voices. He said, “If we make up our minds, we can turn this around in the next 8-12 or maximum 15 years,” while emphasizing the need for concerted action before it is too late.
Studies have already shown that over half of our agricultural land has already been degraded, which means that soil is losing its organic content and turning into sand. Alarmingly, the United Nations’ Food and Agriculture Organization (UNFAO) estimated that within 60 years, we might not have any topsoil left at all. If no action is taken in the next 25-30 years, we could all be facing the gravest food crisis encountered. The United Nations Convention to Combat Desertification (UNCCD) and the UNFAO has warned that soil extinction poses a global threat to food and water security and could result in brutal civil strife around the world. It could also set off an unprecedented migratory exodus, threatening the national security of every country.
To bring the world’s focus to this alarming issue, Sadhguru – founder of Isha Foundation has embarked on a 100-day, 30,000 km lone motorcycle journey across 27 nations on March 21st. The journey, passing through UK, Europe, Asia and the Middle East, aims to raise awareness and build consensus for policy initiatives to prevent soil extinction, by raising soil organic content to a minimum of 3%. Sadhguru is meeting with experts, policymakers, influencers and millions of citizens to bring forth this issue, and support policy action towards saving our soil and our future, in all 193 nations.
The Save Soil movement has garnered wide support across the globe, with some nations already signing memorandums of understanding (MoUs) with Save Soil as a commitment to implement policies in that regard. International organizations that are leading ecological action, such as IUCN and UN agencies – UNCCD, World Food Program, UNEP have come forward to partner. Millions of citizens across the globe are increasingly supporting this movement.
Earth Day is one of the largest civic events in the world, celebrated by close to 1 billion people every year, from 1969.
Conscious Planet: Save Soil, is a global movement to inspire a conscious approach to save our planet by focussing on keeping soil fertile. This is a people’s movement. The aim is to demonstrate the support of over 3.5 billion people (more than 60% of the world’s voting population) around the world so that governments are empowered to initiate sustainable policy-driven action to revitalize soil and halt further degradation. World leaders, influencers, artists, experts, farmers, spiritual leaders, NGOs and citizens are vocally supporting the movement to re-establish humanity’s relationship with soil.

AAP was once again attacked by another idle MLA for doing what should have been his and the Govt's job. Earlier today Churchill Alemao from ... Read More

Congress has stooped down abysmally to target Manohar Parrikar: Sawant

IMD cautions of a possible heatwave condition in Goa

Goemkarponn desk PANAJI: IMD has cautioned of possible heatwave conditions in Goa as the max temperature is expected to soar 4 degrees Celsius above average. ... Read More