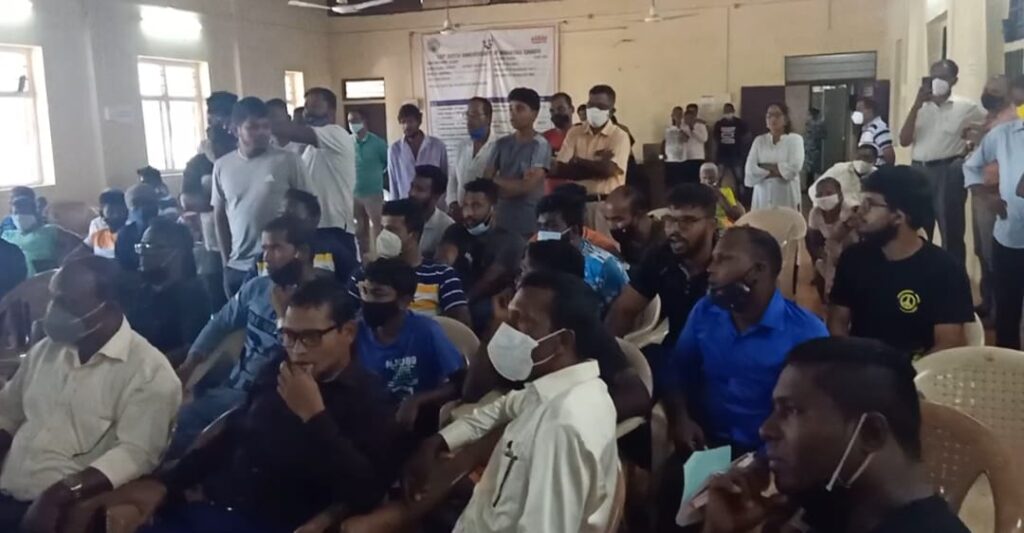 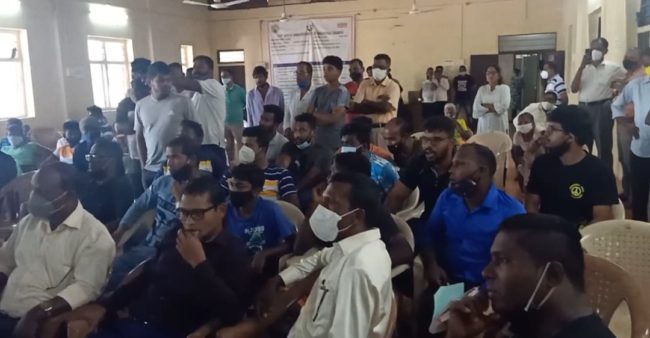 CURCHOREM: Vacant space of the Housing Board colony and the controversial residential project from the Xeldem panchayat area rocked the Xeldem Gram Sabha on Sunday.
During the gram sabha meeting held on Sunday at Xeldem Panchayat, there was a heated discussion and drama on two major issues from the village. The local Panchayat failed to take any concrete decisions on these two issues.
Around 50 youths present at the Gram Sabha demanded to have a playground for them. But the Housing Board colony residents protested against their demand and claimed that the housing board residents have a right over the vacant space and warned to seek legal action.
The two issues were between Ward 5 and about 200 villagers protesting and putting forward their proposals. Another issue was work on a residential project in Ward 5 which was stopped by the Panchayat in 2017.
The local villagers opposed the project at the Gram Sabha on Sunday after local villagers accused the Panchayat of ordering the work to start without taking them into confidence.
Reacting to the issues which came for the discussion during the meeting, a local Anil Prabhudesai from the housing board colony said that “this work is illegal and Housing Board residents have the right on this vacant land, if Panchayat doesn’t change their stance on this issue and don’t agree what locals demand then, we will have to seek legal action.
Another resident Avish Desai said that whatever the Panchayat has done on the vacant space of the housing board is illegal, and we oppose it. He further alleged that the panchayat procedures were not followed properly by them, and that’s why the issue has aggravated. Desai also said that the property belongs to the Housing Board colony and the residents of the housing board have right over it.
Furthermore, commenting on the second issue, Caitan Carvalho stated that the work of some residential projects was stopped in 2017 due to some controversy, and now Panchayat decided that work will start again, and the file of the project already put up in the panchayat body meeting without considering local people and keeping local panch in the dark. “If the Panchayat does not clear its stand on the matter and revoke the project licence, then we will be forced to take it to the legal battle.
Meanwhile, the Sarpanch of Xeldem panchayat said that the vacant space of the Housing Board has been handed over to the Panchayat, and the Panchayat will take up the development work on this land, whether it is a volleyball ground or a children’s park will be decided later in the meeting.
The Director has given permission to the local panchayats to use the site for any development work.
Commenting on the second major issue related to a residential project, Sarpanch said that no decision has been taken yet on the project, adding that a decision on this project will be taken after further investigation.
Panchayat Secretary Ravindra Wadikar said that decisions on both issues have not been taken. Although the subject of the Housing Board open space will be taken up after a special meeting of the Panchayat members.
The residential project was stopped due to some disputes; a decision on this matter is possible only after the inspection by the local panchayat,” Wadikar said.
During the Gram Sabha, there were two opinions on the issue of the Housing Board. Some youths at the meeting said that there is a lack of playground facilities for youth from Shiv Nagar, Taki and Sonfatar areas of Xeldem panchayat. They also pointed out that the local Panchayat and panch members should sooner give them these playground facilities.