134 vehicles for SWEARING-IN of nine ministers? 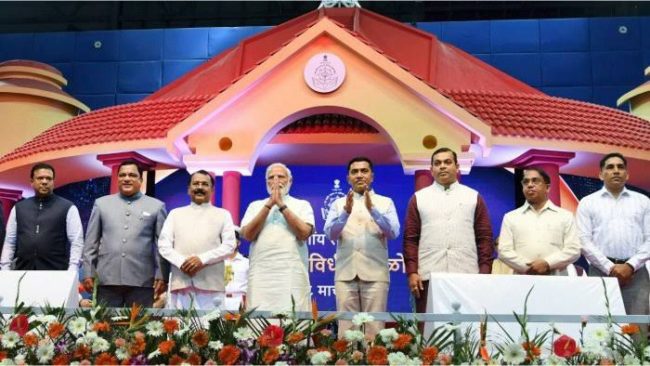 PANAJI: In another shocking revelation, a whopping amount of Rs 72,21.972 (rupees seventy-two lakhs twenty one thousand nine hundred and seventy-two) was spent on the vehicles hired for the VIPs and their security at the swearing in ceremony of Chief Minister Pramod Sawant and his eight Ministers held on March 28th Dr Shyama Prasad Mukerjee Stadium at Bambolim.
This has been revealed in the information obtained by Adv. Aires Rodrigues from the Goa Tourism Development Corporation (GTDC).
The GTDC had provided 134 hired vehicles to the protocol department for the occasion.
This expenditure incurred is in addition to the Rs 5,59,25,805 (Rupees five crore fifty-nine lakhs twenty-five thousand eight hundred five) spent by the General Administration Department at the Goa Secretariat and a further Rs 24 52,477  by the Information department by way of publicity for that swearing-in ceremony.
Pointing that this mind-boggling information so far obtained reveals that the Goa government recklessly and needlessly drained at least Rs 6, 56, 00, 254 on that 18-minute function, Adv. Rodrigues has stated that all this was a gross impermissible criminal waste of public funds when the poor and elderly in Goa had not been paid their much needed monthly benefits for their entitled Social Welfare schemes.
Adv. Rodrigues has urged Goa Governor PS Sreedharan Pillai to awaken to the administrative chaos that the State of Goa is going through.
This cost is over and above Rs 5.5 cr for the swearing-in ceremony.
As per the documents obtained under RTI M/s, Vinsan Graphics, on April 13th, sent their invoice for an amount of Rs 4,79,11,245 (Rs four crore seventy-nine lakh eleven thousand two hundred and forty-five), which invoice was received by the government on the very same day. M/s Vinsan Graphics later sent a revised invoice for an amount of Rs 5,59,25,805 (Rupees five crore fifty-nine lakhs Twenty-five thousand eight hundred and five), which invoice though also dated April 13th 2022 was received by the government only on April 22nd 2022.