After POWER DEBATE 2.0: Sawant, Kejriwal engage in war of words 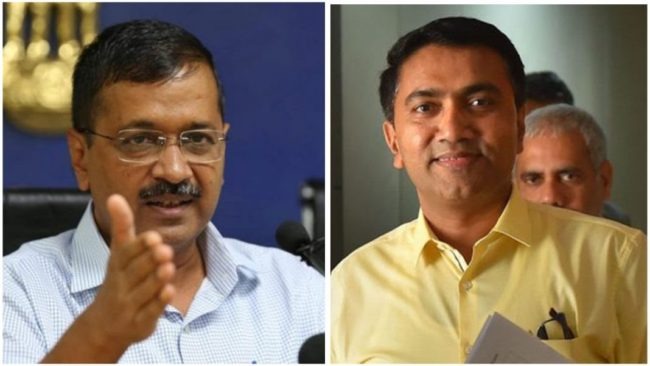 PANAJI: Following alleged “insult” of Goan politicians by Aam Aadmi Party, Chief Minister Dr Pramod Sawant has lambasted AAP for insulting Goan politicians and terming them as “Third Class”
Delhi Power Minister Satyendar Jain during the debate had termed Goan politicians as third class.
“AAP has always indulged in cheap politics through constant protests & theatrics. But to say Goans are thrid class politicians, is an insult to great sons-of-the-soil like Bhausaheb Bandodkar, Jack Sequeira, Manohar Bhai Parrikar, Rajendra Arlekar or Shripad Bhau Naik, said CM Sawant
He further said that AAP is free to create hype for their political benefits, but coming to Goa and insulting our leaders is unacceptable.
After the power debate, Delhi chief minister Arvind Kejriwal said that the BJP government in Goa had admitted that it has failed to provide power 24X7 in the state.
“Excellent debate between Delhi and Goa power ministers. Good for democracy. Nilesh Bab admitted that BJP failed to provide 24X7 electricity to Goans after so many yrs of rule. BJP also won’t provide free electricity,” said Kejriwal
He said that AAP is committed to providing uninterrupted power in Goa, too, like Delhi.
Later, Kejriwal tweeted that you insult them by comparing the present set of politicians to such political greats. The current BJP neither has the greatness of Bhausaheb Bandodkar, the integrity of Dr. Jack Sequeira or the vision of Manohar Parrikar.
“Bhausaheb Bandodkar has been insulted by the way MLAs have been bought and sold. Dr. Jack Sequeira didn’t fight to see Goan votes being bought and sold. Manohar Parrikar didn’t work tirelessly to see congress MLAs being bought wholesale,” he added
Meanwhile, CM in another statement, said that Goa’s Power Minister Nilesh Cabral represented the people of Goa against politics of falsehood, lies and misleading propaganda.
“He burst the myth of freebies and how it makes people lose out in the long run. On the other hand, Govt of Goa has struck a perfect balance between economic reforms & implementation of welfare measures,” CM said.