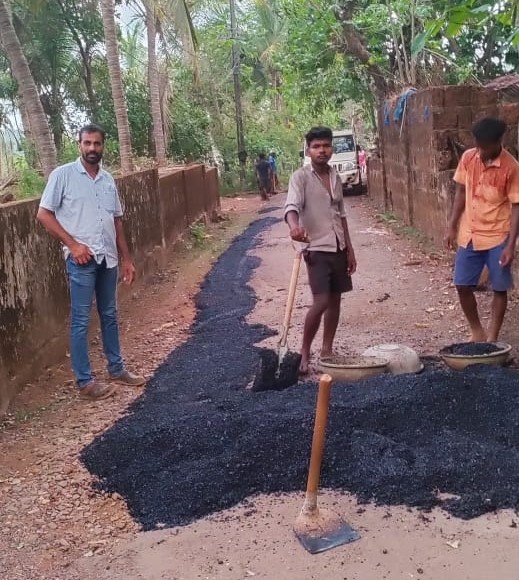 CANACONA – While authorities fails to repair or blacktop most of the delipidated roads in the village, Village sarpanch uses his own resources and manpower to repair a badly mutilated road in the eve of Village feast on Friday.
‘We do not get proper support of the authorities nor the newly elected MLA, while roads in the village have turned death kneel for many. We cannot see the plight of roads turning from bad to worse while authorities are purposely keeping themselves away from attending any of these roads proposed for repairs”, informed Agonda Sarpanch Badal Naikgaunkar.
Pointing to a particular road at Karashir-Moll ward, Naikgaunkar blames the authorities for purposely keeping this extensively and prominently used road which has been turned to give worst driving experiences to motorists, especially two-wheelers, unattended even as monsoon is knocking on the door.
Incidentally, the road has disappeared, and the uneven surface results in several mishaps and riders tumbling down; the authorities first assured to repair it before the elections but failed to attend. ‘After the elections, just to show Agonda panchayat in bad lights, all developmental works were sabotaged by the village political bigwigs.
“I cannot see the plight anymore as even Village feast is approaching now.”, Naikgaunkar, who on Friday evening emptied three pickup loads of Hot-Mix tar and later engaged his own manpower to fill up the potholes to make the road motorable at the least.
According to Naikgaunkar, he is using his own resources towards the costs of Black Topping material (Hot-Mix) of Rs.53000/-, transportation and workmen to bring some solace to some of the residents.
Naikgaunkar informed with no sight of authorities showing any inclination to repair internal roads of Agonda, he has no choice but will be repairing yet another road which is totally washed out before the onset of monsoons.