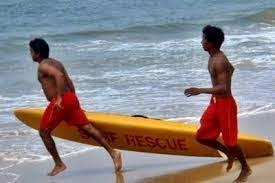 Goemkarponn desk
CALANGUTE: The start of the week witnessed a rescue operation and a first aid emergency on the Calangute and Baga beaches
Drishti Lifesavers were involved in a rescue operation after an unfortunate boat accident on Baga Beach. A family of nine from Sikkim hired a boat to embark on a short ride on the waters. During the journey, five women on a separate boat abruptly upturned 25 meters deep in the water.
Drishti lifesavers stationed on the shore were alerted of the incident by concerned individuals. On hearing the information, the four lifesavers, Vinod, Dilkush, Vishal, and Atul, rushed to the scene of the incident on jet skis. Two of the five escaped unharmed, but three, with ages of 40 years old, 56 years old and 50 years old, suffered a head injury and a deep gash in her hand, while one was undergoing breathing problems. The family of 5 were returned back to shore and underwent medical assistance from the lifesavers. While the four returned back to their family, one was rushed to the nearest health clinic.
In a strange series of events, at Calangute beach, a child from Hyderabad, while playing in the water with her family, was wounded by another beachgoer. As reported by the family, the individual raised his leg and struck the child’s face leading to bleeding in her nose and mouth. The lifesavers attended to the child after being informed by the parents about the incident on the shore.
The girl was subsequently handed over to the 108 services for further medical examination.
Five men from Bangalore, four between 26 and 27, decided to venture out in the Arambol Sweet Lake. On noticing the harsh currents, the men were instructed by the lifesavers to return back to shore.
With prior instructions and warnings, the four men decided to return to the lake, which resulted in the four men becoming entangled in a strong current and being thrown off balance and helpless. Seeing the struggle, Drishti lifesavers Priyesh and Satish, as well as a member of the BSP, Satish, rushed to their aid with rescue boards. The four men were brought back to shore and were unharmed.
Drishti recorded eight rescues on the Goa coast over the weekend, including four males rescued at Arambol Sweet Lake, a triple rescue at Vagator beach, and a single rescue at Palolem beach.
While at Vagator beach, residents from Nagpur and Solapur, two boys aged 10 and 14 years old, while one adult aged 44 years old, were caught in a strong current. As reported by the lifesavers, the three were part of a larger group of 10. While swimming next to the shore as instructed by the lifesavers on the beaches, the three started to break off from the group into deeper waters. They then found themselves stuck in a rough and strong current which pulled them further deep. The lifesavers, while noticing a sudden commotion on the edge of the shore, rushed to investigate the cause. The lifesavers Balkrishna, Devu, with the help of a rescue tube and surfboard managed to secure all three individuals and return to shore. The three were returned to the group unharmed.
Nilesh, a Drishti lifesaver, performed a single rescue at Palolem beach with the assistance of a rescue board. The woman, hailing from Karnataka in question, was caught helpless in a riptide on Palolem beach. Bystanders alerted the lifesavers for immediate assistance after the woman managed to signal for help.
First aid was administered at two locations. One at Anjuna beach, a woman, aged 52 years old, while involved in a water sport activity, accidentally twisted her leg in the water; lifesavers immediately performed first aid on the area of the injury. At Aramabol Sweet Lake, a man suffered a deep gash on his finger while coming in contact with a sharp object which resulted in a loss of blood. The lifesavers instantaneously treated the wound, and the man returned back to his wife with his finger bandaged.
Drishti’s lifesavers are trained to conduct rescues in rough weather and sea conditions.