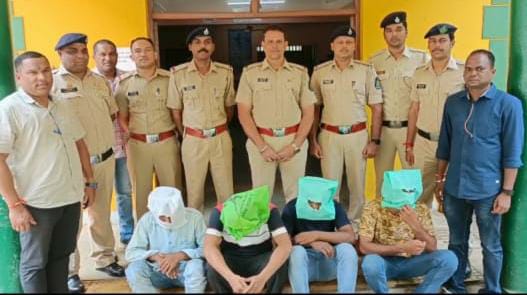 Goemkarponn desk
VASCO:
Two days after Goa celebrated 75th Liberation Day, here comes a horror story of the gangrape of a minor girl in Vasco.
Vasco Police on Wednesday arrested four persons on charges of allegedly raping a minor girl.
The four accused persons, Mukund Rawal (35), Guru Venkatesh Guruswamy (30), Kush Jaiswal (30) and Aftar Hussain (23), all residents of Vasco were arrested under section 376 IPC, Section 8 of the Goa children act and POCSO act.
Speaking to the media, Vasco PI Kapil Nayak said that the mother of the minor child had complained that the minor daughter had gone missing from her house on the night of 11th August
“Since the girl was minor, we registered a kidnapping case under section 363 IPC and Section 8 of Goa children act against unknown persons. We started our investigation by forming teams to search for the missing minor girl; and we managed to trace the minor girl yesterday, and we recorded her statement before the NGO. It was revealed in the statement that four accused persons had sexually assaulted the minor girl independently but on different occasions. One of the accused had abused her last year in August 2021 and March 2022 and was working as a driver in the house of the minor girl,” said PI Naik.
He said the other three accused abused the girl since she was missing from 11th August on different occasions. We have added section 376 IPC read with 34 and 4,8,12 of the POCSO act. All the four accused took advantage of the girl being a minor and sexually abused her, and we have already arrested all the four accused persons,” said Nayak.
“When the girl left the house, all the three accused took advantage of the minor girl and sexually abused her, and we are further investigating the case,” said Nayak.
PSI Mayur Sawant of Vasco police station is investigating further under the supervision of PI Kapil Nayak and the guidance of Mormugao DySP Rajesh Kumar.