Bardez to decide Goa’s next Govt? 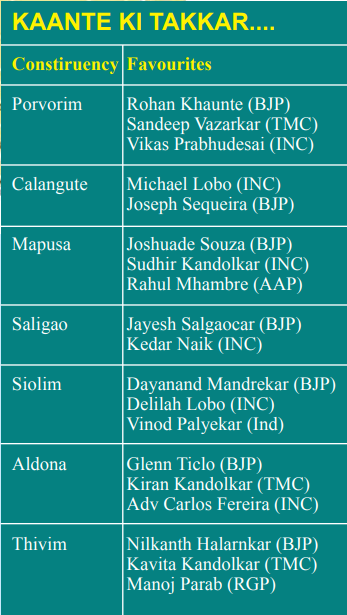 PANAJI: Salcete is no more the decisive taluka in Goan politics as the people by and large have understood that the battle for that taluka is between the Congress (INC), the Aam Aadmi Party, Trinamool Congress and the independents.
Thus the BJP, which is ruling today, does not stand any chance of winning any seat there.
So if the, which is facing a strong anti-incumbency due to anti-people decisions, will have to do its best where they have been strong traditionally, and that is Bardez taluka, which has six seats – Calangute, Mapusa, Siolim, Saligao, Thivim, Aldona and Porvorim.
In all, it looks to be a Lobo-BJP fight for supremacy in Bardez rather than the Congress-BJP fight.

Lobo v/s Joseph in Calangute…
However, with their kingmaker Michael Lobo switching sides to Congress, the BJP is fighting hard to hold their fortress.
Lobo, who is a two-time MLA, is contesting in Calangute again and is facing a strong challenge from BJP’s last-minute nomination Joseph Sequeira, who seems confident of upsetting Michael Lobo’s applecart.
“People are fed-up against Lobo due to large scale destruction, and they will vote for a change,” says Sequeira.
On the other hand, Lobo is banking on the development he has taken up in the constituency.
“People know who is Joseph and who is Michael, and they will use this chance to weed out the “corrupt” BJP from Calangute,” he says.
Apart from Lobo and Joseph, other candidates are TMC’s Anthony Menezes, Aam Aadmi Party’s Sudesh Mayenkar and Goa Swabhiman Party’s Roshan Mathias, who could play spoilsport for Lobo.

It’s Rohan all the way in Porvorim…
As the surveys stand today, two time-independent MLA and former Minister in Manohar Parrikar government, Rohan Khaunte, is way ahead of his opponents in Porvorim.
His opponents, TMC’s Sandeep Vazarkar and Congress’ Vikas Prabhudesai, have a lot of ground to cover if they want to challenge Khaunte.

It could be anybody’s game in Mapusa as BJP’s Joshua D’Souza fights to take his late father Francis D’Souza’s legacy forward.
Until the announcement of elections, the Congress candidate, strongly backed by Michael Lobo, was the favourite, but suddenly Joshua seems to have covered a lot of ground and seems to be the favourite now.
For Joshua, another good part is AAP convenor Rahul Mhambre will get a good chunk of votes.
Mhambre himself will get good votes and may spring a surprise if people decide to vote for change.

Fight between Mandrekar-Delilah in Siolim
A keen tussle is on the cards between the former minister and BJP candidate Dayanand Mandrekar and Michael Lobo’s wife, Delilah Lobo. 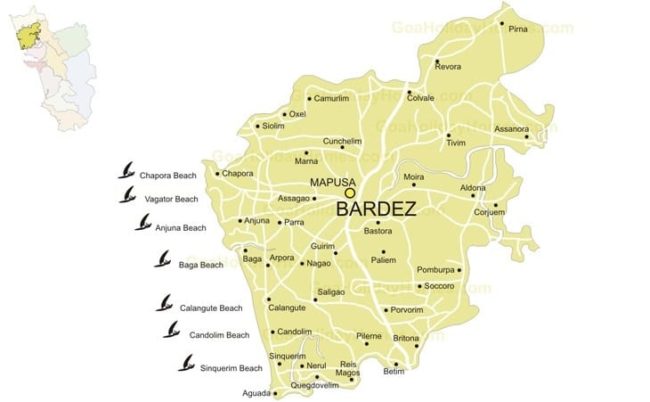 Though Lobo had taken a huge lead in the initial phase, Mandrekar has covered a lot of ground and is a strong challenger to Lobo.
Another factor that could play a major role is former minister Vinod Palyekar, who quit Goa Forward to fight for independent will also take a good amount of votes.
Hence, the fight could be called a triangular between Lobo-Delilah-Palyekar.

Will Aldona vote for Ticlo again?
Aldona is another constituency that will see a big fight between the BJP, Congress and TMC.
BJP’s Glenn Ticlo is vying for a hattrick in the constituency but is facing a tough challenge from TMC’s Kiran Kandolkar and Congress’ Adv Carlos Fereira.
Kiran had a clear upper hand in the constituency but his decision to join TMC has not gone well with the voters, which has given a fresh lease of life to Ticlo.
Again backed by Lobo, Adv Carlos is gaining ground with every passing day.

BJP-TMC-RG battle in Thivim…
The one seat which everyone seems to have eyes on is Thivim, wherein the Revolutionary Goans Party (RGP) supremo Manoj Parab is contesting elections from.
The RGP has garnered huge support throughout Goa, but there is no clarity on whether this support will convert into votes.
Their vision of POGO, Goa for Goans, has been welcomed by the people.
On the other hand, there is strong anti-incumbency against Nilkanth, who many say did not support people during a pandemic. Locals say he had to face backlash during the door to door campaigning.
Another strong contender is Kavita Kanodlkar, but the TMC factor in a Hindu majority constituency could play a crucial role.