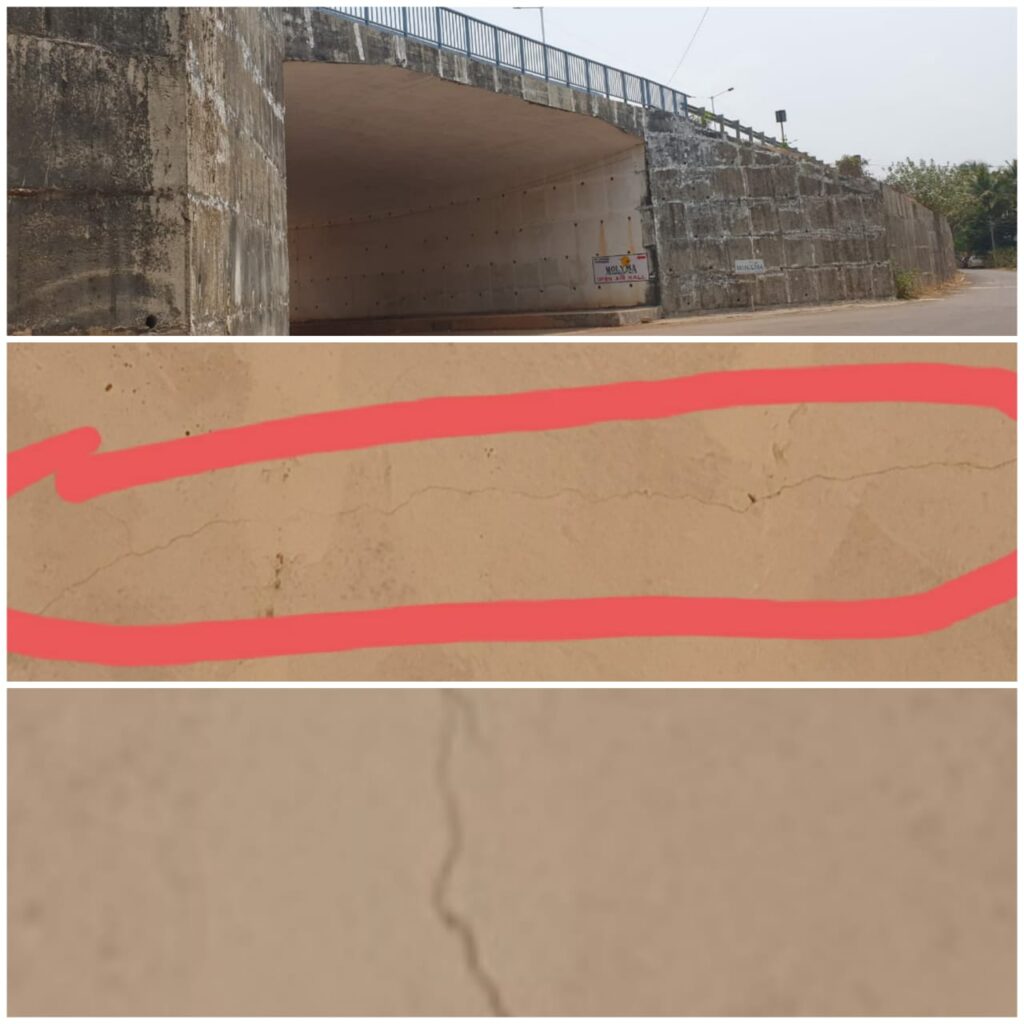 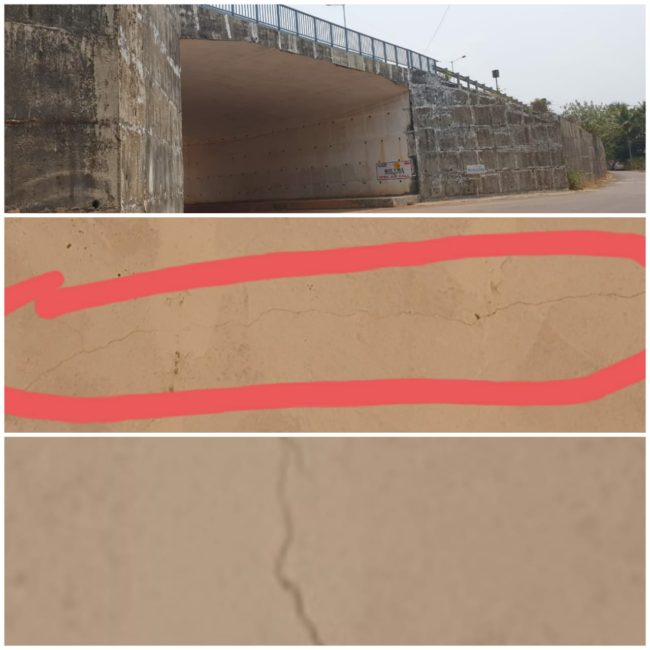 Canacona.
A minor 10-mt wide bridge at Rajbagh on the newly commissioned 7.74km Manohar Parrikar sea side link road has developed multiple fissures on the underside which might require both immediate inspection and attention from authorities which otherwise might end up in a tragedy locals from here feel.
Cracks are too many to neglect which might be a reason for the bridge to fail in future say experts in bridge building and maintaining technology.
Canacona MLA and deputy speaker Isidore Fernandes after being informed of the development of the cracks informed this correspondent that he has already informed the authorities about the cracks and a need for immediate inspection of these cracks apart from other issues plaguing this all-important road.
Ganesh Dhuri a local while passing under this bridge on Monday morning was the first one to observe these cracks which he says may not be superficial and might run inside the concrete of the bridge which stand beside Molyma Hotel at Rajbagh.
As the underside deck of this bridge under which an underpass road passes from Rajbagh to Kindlem is not plastered it looks to be the cracks for the concrete itself he reasoned out while pointing out to atleast about fifty cracks.
When this correspondent inspected the underside of this minor bridge the cracks were observed all over and some of the cracks ran more than a few metres.
Most of the cracks run across the bridge while some are along the bridge.
This bridge is part of the 7.74km bypass road which was constructed at the cost of about 300 cr of public funds and was thrown open for traffic in November 2019.
The bypass has two major bridges one on the Talpona river and the second bridge bridges the Galgibagha river and Mashem river creek.
The bypass was constructed by MVR Infra Projects Pvt Ltd and the work to build the bypass which began in 2015 was completed in the end of 2019 to the relief of thousands of commuters passing through Canacona on NH66 road.
This bypass road is a boon to the commuters who are travelling through Canacona as it reduces the travel distance and time by ten km 30 minutes respectively.
It also avoids the commuters from passing through narrow winding road through Poinguinim which was witnessing several accidents every now and then before this road was commissioned.
Locals had raised serious issues concerning the quality of material and man power used by the contractor as one girder had vertically broken while pretensioning and another had micro cracks on one end.
The authorities when asked had also admitted that the two girders had been tendered unusable and will be discarded.
A civil engineer well versed with building of high-speed roads and bridges asking anonymity informed that bridge construction is not that easy as it looks to be, lot goes into designing and calculations of the steel required and the thickness of the concrete to be casted to the bridge depending upon what type of load will be plying over it he said.
Elaborating further he said that the concrete in the open air usually shrinks during hardening. This shrinkage is due to the evaporation of part of the water contained in the concrete and cracking occurs when shrinkage forces become greater than the strength of the concrete.
“Other external factors like vibration due to constantly moving traffic, curing with water up to 4 weeks also plays a important part to attain maximum strength for the concrete he opined.
When this correspondent informed about the presence of several cracks on the underside of this bridge they immediately responded by saying that an Authority Engineer will be sent for immediate inspection.
Canacona MLA and deputy speaker Isidore Fernandes when informed said that he has already brought the issue to the notice of the authorities, I had also earlier emphasised on conducting a structural stability test on this stretch of road and locals have raised serious concerns with respect to the safety while commuting on this road Fernandes added.
“Before the inauguration of this road I had raised questions over the safety of the commuters as lot of locals had complained to me about the quality of the work undertaken by the contractor” Fernandes expressed.