Cabinet Rank will leave a “Scar” on Sr Rane’s caree 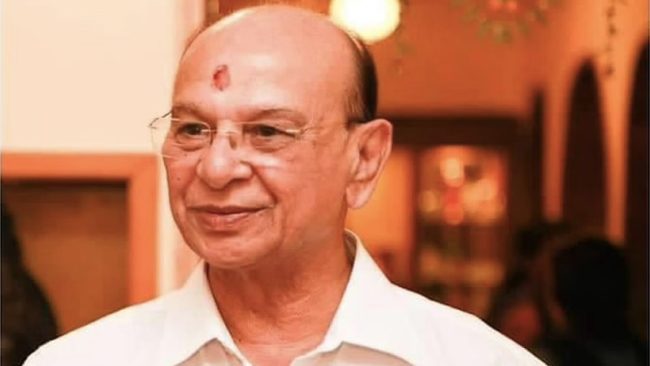 The BJP government has decided to give the status of a cabinet minister to senior Congress leader and former Goa chief minister Pratap Singh Rane, who will be given lifelong privileges after his political retirement. Pratap Singh Rane, 82, has completed fifty years as the MLA of Goa Legislative Assembly. On that occasion, the BJP government is honouring this senior Congress leader. Though the Goa government’s decision is a matter of constitutional controversy, the BJP government’s shrewd Chief Minister Pramod Sawant has played the trick of killing several birds with one stone.
Pratapsingh Rane has been in Goa politics since 1972. He served as the Chief Minister six times from 1980 to 2007. He got the opportunity to become the Chief Minister as a consensus candidate even though the Congress party was in trouble many times. He was the third Chief Minister after the first Chief Minister Bhausaheb Bandodkar and the second Chief Minister Shashikala Kakodkar
During Pratapsingh Rane’s tenure as Chief Minister, many development works took place. Kadamba Transport Corporation, Goa University, Goa Management College, Salavali Dam are the projects of his time. His administration has always been corruption-free.
His career as the Chief Minister is well known for having full control over the administration. Journalists like Rajan Narayan, however, always criticized his rule.
Pratapsingh Rane also made two defections before becoming a Congress MLA in Goa, a state which is a paradise of defection. He first reached the Legislative Assembly as MLA of Maharashtrawadi Gomantak Party and also became a Minister.
After having a difference of opinion with Shashikalatai, he left MGP and joined Devraj Ars’s Ars Congress. ARS Congress later merged with Indira Congress. Therefore, Rane also became a Congressman.
With Congress gaining a majority in the 2007 elections, Rane had a chance to become the Chief Minister for the seventh time. But internal strife within the Congress party forced him to resign.
Digambar Kamat became the then Chief Minister of the Congress party, and Rane became the Speaker of the Goa Legislative Assembly.
While Manohar Parrikar was the Chief Minister of Goa, the post of Leader of Opposition in the Goa Legislative Assembly passed to Pratapsingh Rane.
Being the Leader of the Opposition, he was also the President of the Kala Academy of the BJP government. At that time, his wife Vijayadevi Rane was the President of Bal Bhavan, and his son Vishwajeet Rane was the President of Goa Tourism Corporation.
Pandit Jawaharlal Nehru had uttered the phrase ‘Ajib hai Goa ke log’. In the same Goa, it was almost inevitable for politicians to be weird. Despite being the Leader of the Opposition, Rane was the only Leader in the country at that time to hold a position given by the government. Needless to say, then Chief Minister Manohar Parrikar broke the opposition by involving the Rane family in power.
Pratap Singh Rane’s son Vishwajit Rane created the tradition of wholesale secession in the seventies by becoming “Baap Se Beta Sawai”. He used to get elected on the candidature of Congress party and join BJP government.
Rane said that his son was not listening to him and this oblivious practice continued until today.
In 2017, giving a tough fight to Parrikar Congress won 17 seats. A leadership dispute erupted in Congress. Realizing that his father was not going to be the Chief Minister, Vishwajit Rane jumped out of the sinking ship of the Congress for the first time. The Congress continues to sink to date.
Senior Congress leader Adv. Ramakant Khalap drafted the disqualification petition. The petition was prepared by Chellakumar, the then Congress in charge of Goa. But it is said that Pratapsingh Rane prevented the Congress MLAs from signing the petition. Therefore, the petition disqualifying Vishwajit Rane could not be filed in court.
The BJP government has decided to give Pratapsingh Rane the status of a lifelong cabinet minister on the occasion of him completing 50 years in Politics. Pratapsingh Rane receiving this award from BJP in the latter part of his life does not suit his career. Former Justice Ferdin Rebello also supported his claim saying “he should reject the post.”
“As Rane’s son Vishwajit Rane is a minister in the state cabinet, the decision may be for personal gain”. Rebello says. The advertisements given by the health ministers in the newspapers thanking the government only prove this claim.
While he is sure he will be elected from the constituency in the forthcoming assembly elections, Rane has thrown the Congress party under the bus for refusing to contest the polls out of love for his son. Because in the beginning, he had announced that he would contest the elections as his supporters wanted him to.
“The constituency is not Vishwajit’s Bhat”, the son was told. But he immediately turned around and refused. In other words, they have given Valpoi and Poriem constituencies to BJP on a silver platter.
The BJP is convinced from Parrikar’s tenure that if Rane’s family is kept happy, Bicholim, Mayem and Sakhali constituencies can be won along with Valpoi and Poriem. Chief Minister Pramod Sawant has done a clever job of securing chain constituencies in the forthcoming assembly elections and also pulling five constituencies in North Goa to the BJP.
Because Rane, father & son duo have an influence on these five constituencies. Ordinary Goemkars also understand what it means for BJP to honour Congress’ Rane. If Pratap Singh Rane accepts the status of a lifetime cabinet, he will prove to be king Yayati in Gomantak politics.
This is exactly what will happen to his career today. A king named Yayati, in his old age, still wanted to enjoy all the pleasures of life.
He finally asked his son for his youth. Rane is falling prey to the lure of the BJP at the age of 82 by sacrificing the future of the Congress party instead of his son.
Although the lifetime privilege they get is for the welfare of the Rane family, it will be another bad step in Goan politics.