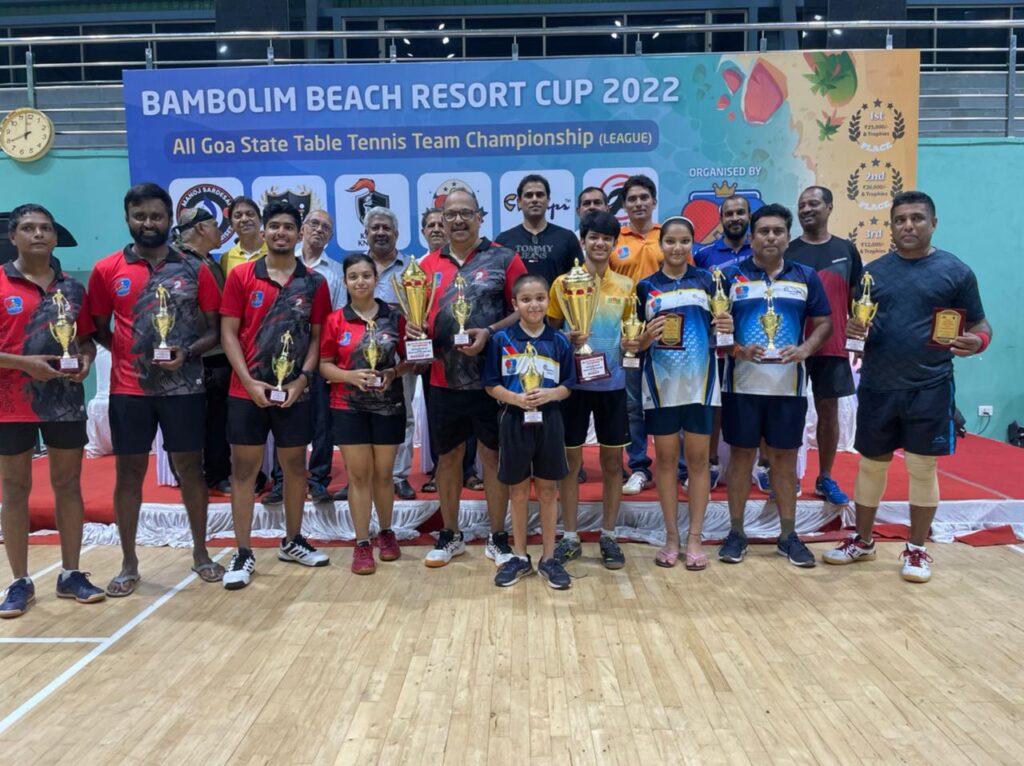 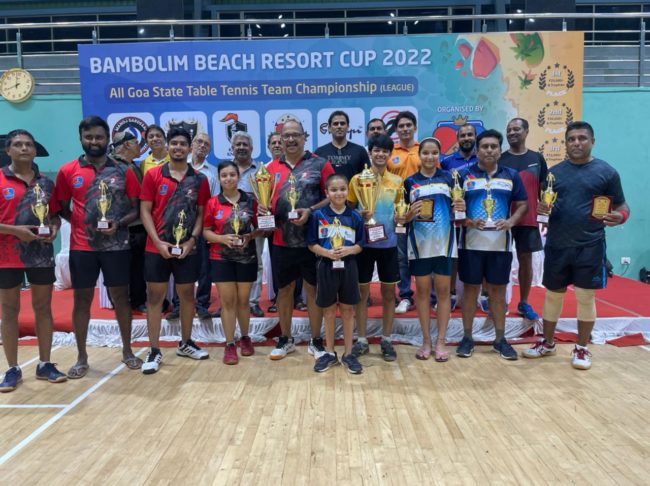 PANAJI: Champs edged out Mayur’s Spartans 3 -2 to lift the inaugural edition of the Bambolim Beach Resort Cup 2022, the State Team Table Tennis Championship, held at indoor stadium, Campal. Anshuman Agarwal and Pradnya Caro starred for the winners in the title match, which went down to the wire. Spartans started on a bright note with their Junior player Swayam Chodankar prevailing over emerging youngster Chandan Caro in a tense 3-1 score line.
Anshuman thereafter restored parity for Champs with a fine display of aggression and consistency. The young paddler who has been selected under the Kjhelo India scholarship recorded a crushing 3 – 0 win over Dheeraj Rai in Men’s singles to make it 1 -1. Pradnya thereafter stole the show in ladies singles to swing the momentum in favour of Champs with a 3-0 demolition of Kiara Soares. However, Yusuf Shaikh and Mayur Sawkar brought the Spartan’s team back into contention with a 3-1 win in Veteran’s doubles over Oliver and Rohit.
With the finals evenly poised at 2 -2, Anshuman and Pradnya stepped up in mIxed doubles to smash their way to a facile 3-0 win, thereby securing a 3 -2 win for Champs.
The battle for the 3rd and 4th places was a similar edge-of-the-seat thriller, with Diya Enterprises registering a pulsating 3 -2 win over Estilo Legends. Earlier in the semi-finals, Mayur’s Spartans defeated Diya Enterprises 3 -2, while Champs defeated Estilo Legends 3-0.
The first-of-its-kind event, organised by North Goa Table Tennis Development Council under the aegis of Goa TT Association, featured 12 Corporate teams, namely Kabir’s Knights, Patanjali Mega Store, Elfonte, Tuff Security, Champs, Estilo Legends, Verekars, Diya Enterprises, Ulhas Jewellers, Mayur’s Spartans, Kirtani And Marc’s Titans.
Champs, who won the team Championship, was awarded a prize money purse of Rs 25000/-, followed by Rs 20000/-, Rs 12000/- and Rs 8000/- for Runners up, 3rd and 4th place teams, besides a haul of medals and trophies.
Meanwhile, Lloyd Fernandes, who won a silver medal at Para Table Tennis Nationals, was felicitated on occasion. Vero Nunes, President, Goa TT Association, Christopher Menezes (Secretary), Vishnu Kolwalkar (Vice President), Kabir Makhija (Member), Mayur Sawkar (Organising President), Daniel Pinto, Yusuf Shaikh and Ajit Parsekar (Organising members), and Prakash Kamat (President, Para TT Association) graced the finals among others.