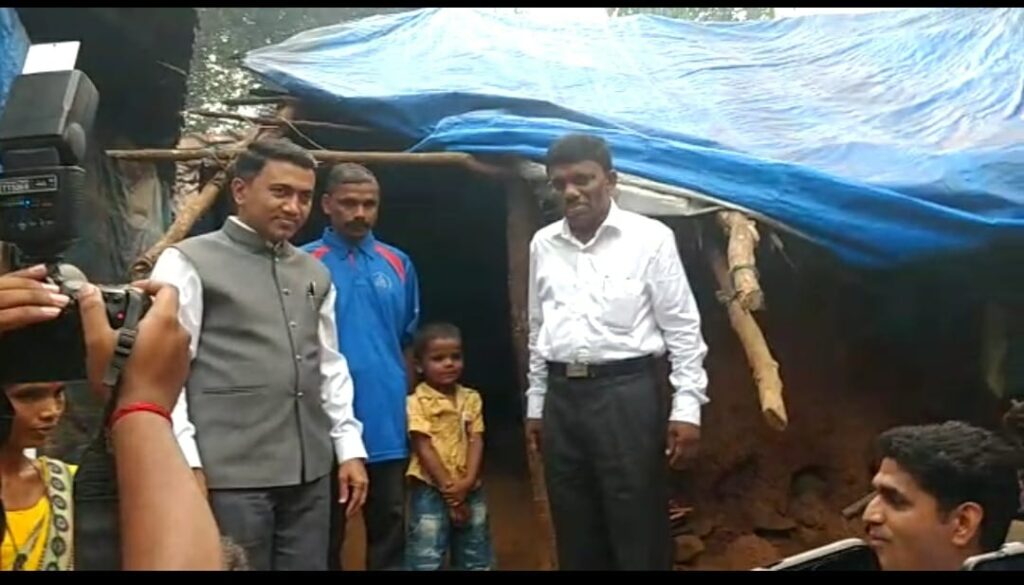 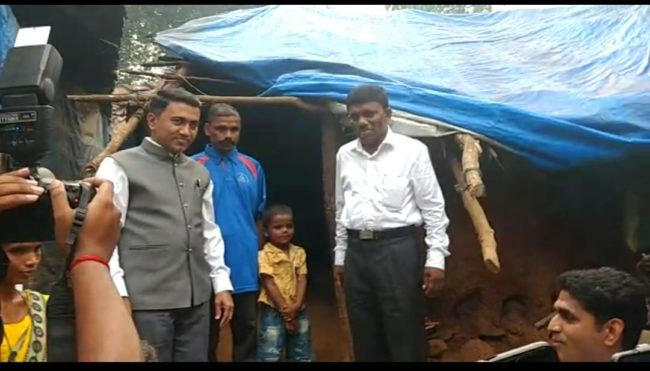 CANACONA- Laying foundation stone to construct two houses in Canacona under BJP’s Seva Sankalp program, Chief Minister Dr Pramod Sawant announced one lakh each from Chief Minister Fund to build many houses for the needy families identified by BJP karyakartas.
Dr Pramod Sawant spoke after laying the foundation stone to construct the House to the families of late Somnath Mirashi of Ziltawadi (Gaondongrim) and Kamlakar Gaonkar at Baddem(Khotigao) in the presence of Speaker and Canacona MLA Ramesh Tawadkar and others.
‘We have just launched Swyampurn Goa 2.0 to work even vigorously for the poorest of the poor in the state (on the lines of Antoddhya). In the last 3 years, We have announced and have even given financial assistance of Rs.2.50 L to build a new House and 1.50L for repairs under the Swayampurn Goa 1.0 identified by Swyampurn Mitras,” he said.
He said that in ‘Sarkar Tumchea Dhari’, Govt had come to the doors of each constituency, but in Swayampurn 2.0, it will go a step ahead, and the government will effectively come at the doors of 3 or 2 villages panchayats.
“Any Goan resident (Mul-Goenkar) in whichever corner he/they are, be it Cotigao in Canacona or Parcem in Pernem, they should get all their basic needs solved as their their ‘Right to Live’, they should have a proper house, electricity, water and two meals in a day, and more importantly their children should study; this is my main aim and concern’,” he said.
He said that as per the Canacona MLA, ten to twelve households not having proper shelters are identified in Canacona.
“I assure you be it even 20 or more houses, each of these houses will get one lakh of rupees from CM Relief Fund, besides the eligible amounts of 2.50 L or whatever from the applicable schemes,” he said, adding “we will give 100 % assistance to Canacona, and I repeat 100 per cent and It won’t be too long for Goa to become self-reliant (Swyampurn Goem).
Chief Minister also asked the bjp Karyakarta’s become more responsible social workers and approach, identify and report the needy families living in poverty and reach the help to such families.
“Whenever you need government assistance, your MLA and Speaker are with you; just give us an order, and the government will be at your door to assist you. I assure and quote once again ‘.Canconkarank Bhiyevpachi garaz na’, he said.
Incidentally, the two houses are built for the families who live in almost shanties type of structure and cannot afford to build a home, it will be made from the contribution initiated by Chief Minister, who first put up a certain amount in the Donation/Contribution box, followed by CMC Chairperson Simon Rebello, a few other councillors, while ex-CMC Dy Chairperson Kishore Shet announced Rs.10,000/- as his contribution.
Earlier, CM entered the huts, met the families and assured them that the government would be effectively helping them out. “When your children grow, I expect them to carry out such noble social services for the upliftment of the society.”