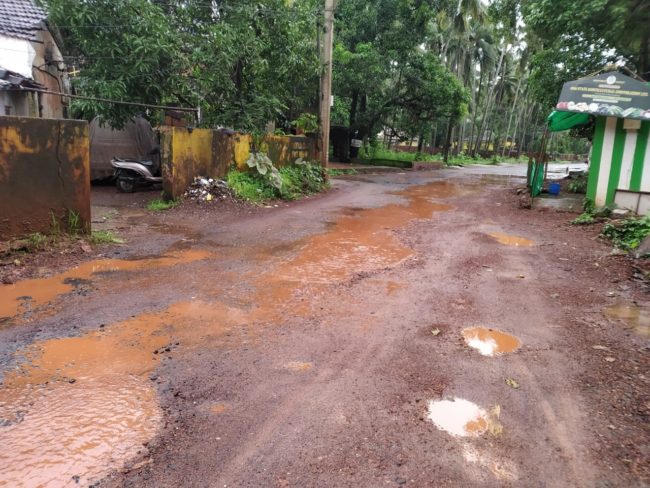 All roads to be pothole-free by Nov 1, says CM
Stern action will be taken on the concerned PWD officials, incase the directions to this effect are not adhered to

Goemkarponn desk
CUNCOLIM: Chief Minister, Dr Pramod Sawant, asserting that the potholes on all roads will be done away with from November 1st, said that stern action will be taken on the concerned PWD officials, incase the directions to this effect are not adhered to, as necessary direction have been given to the PWD officials.
The Chief Minister, Dr Pramod Sawant, was speaking after launching the Sarkaar Tumchya Dari event at Cuncolim Education Society College Hall, Cuncolim today.
Speaking further, the Chief Minister said that the idea of the Sarkaar Tumchya Dari programme was to be started immediately after assuming the office of the Chief Minister but was delayed due to difficulties faced such as Covid-19, Tauktae Cyclone, flood, etc.
Speaking further, the CM said that the Goa government was the first State to provide free of cost treatment to Covid-19 patients at Government hospitals and private hospitals despite difficulties. Goa was also the first State to provide an amount of Rs. 200000 Ex-gratia (financial assistant) to the family of Covid-19 victims. The Government has also planned to provide Rs. 50000 through Central Government, he said.
As India is Celebrating Azadi Ka Amrut Mahotsav’ and the State is celebrating 60 Years of Goa Liberation, people should take Government’s Swayampurna Goa concept forward and make it successful for the overall development of the State, Dr Sawant appealed.
“My Government is working on serving and reaching out to the last person of the society by way of human development. He remarked that Government is working irrespective of caste, creed, or any other differences with the sole objective of human development,” he said.
Stating that the State Government has appointed Government Officers as Swayampurna Mitra for as many Village Panchayats and Nodal Officers at taluka level, under Swayampurna Goa Mission, he said these Swayampurna Mitra visit the Village Panchayat to co-ordinate with the Sarpanches, Panchayat members and Village Panchayat Secretaries to ensure that the benefits of welfare schemes implemented by the State and Centrally sponsored schemes are reaped by the needy and deserving people including its effective implementation.
The Government has all together 152 schemes which many people are unaware of those. Hence, the Know your Scheme program was introduced to make the people aware and understand each and every scheme to take maximum benefits. Government is ready to provide every support for the development of people, he said and urged the people to derive maximum benefit from the government schemes.
Altogether 40 Government departments participated in the programme and facilitated people with schemes and benefits of the schemes.
Speaking on occasion, Filipe Nery Rodrigues expressed happiness to work with the present Government led by Dr Pramod Sawant, as its primary aim is the State’s overall development.
The Chief Minister also distributed sanction orders to covid relief beneficiaries under the Ex gratia relief fund to the families of Covid 19 victims and also held a review meeting with Swayampurna Mitra’s.

Symptomatic patients who test -ve, to be treated as “proxy” COVID19 patients: Rane

Panaji: As per the recent WHO guidelines, the Expert Committee on COVID19, headed by Health Minister Vishwajit Rane, to create a new category of proxy ... Read More

PANJIM: Goa saw a total of 374 positive cases on Sunday while a record 558 were declared cured. Also 7 deaths were reported today. As per ... Read More

NEWER POSTREGINALD TO BE AAP’s CM FACE IN GOA?
OLDER POSTAAP National Convenor Kejriwal is expected to be in Goa on Oct 7