After re-christening Sawant as “Pappu”, Rohan Khaunte joins BJP; says ready to work along with CM Sawant
I do not want Goans to be treated as toys; BJP will attain absolute majority, says Khaunte

Goemkarponn desk
PANAJI: Today, former Independent Porvorim MLA Rohan Khaunte, who had tendered resignation as MLA, joined the BJP. Khaunte will be contesting the upcoming elections from the Porvorim Constituency.
Khaunte had resigned from the post of MLA on December 15. The induction took place in CM Sawant, Devendra Fadnavis, Vishwajit Rane, Babu Kavlekar and Sadanand Tanawade.
“Today I have joined the BJP, but many people are asking me why the BJP when I was criticising the CM; The decision to join the BJP has exclusively been taken by all the supporters, panch members, sarpanch and ZP; Now we have come together and will work for the betterment of the state,” said Khaunte.
He further said that he has always raised issues pertaining to Goa and his Porvorim Constituency, but now the question was how to go forward for the next 5 years.
“I will take all the issues of the state forward by working with CM Sawant. Definitely, BJP will attain absolute majority, and Modi will again become the PM of India,” he added.
Khaunte also said that politics has been changing drastically in Goa for the last 4 months, and it can be clearly seen. He further said that they need to take strong steps in the interest of the state and Goa, and the first step of resigning as MLA has been done.
“I don’t want Goans to be treated like toys; (Goykarak khelne javpak divchona),” said Khaunte.
Rohan further said that his strength lies in your unflinching support, which drives me towards achieving the dream of a vibrant and prosperous Goa.
“I say that agreement, disagreement is part of politics and the differences are on a particular subject and that nothing is personal; I had worked for people when I was in opposition for 7 and half years and 2 and half years in the ruling,” he added. 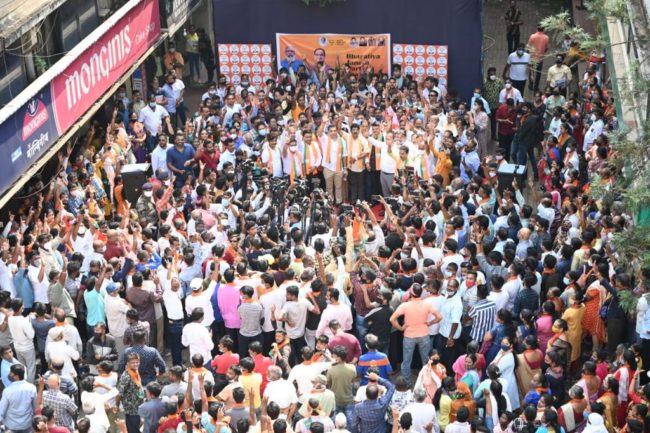 Khaunte said that from now onwards, we and the BJP karyakartas are all one and will work together to better people.
He had represented the Porvorim assembly segment two times as an Independent. With Khaunte’s resignation, Goa House’s strength is reduced to 36 from 40.
Earlier, Congress MLAs Ravi Naik, Luizinho Faleiro and Goa Forward Party MLA Jayesh Salgaonkar resigned in the polls.

HM Rane pitches in for 10 oxygen plants across state; shoots note to CM

Goemkaponn Desk PANAJI: To keep the oxygen flowing and in a bid to overcome shortage, Health Minister Vishwajit Rane has written a note to Chief ... Read More

Goemkarponn desk MARGAO: Just when the tourism season was about to begin in Goa, the tarballs or the oil slicks have hit the Goan beaches ... Read More