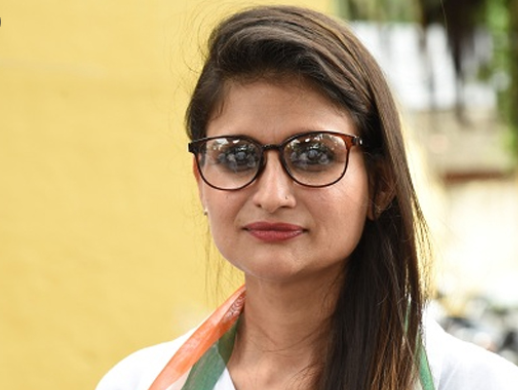 PANAJI: Despite being a single largest party in 2017 with 17 seats, the Goa Congress parts finds itself in a hopeless situation with leaders deserting the party one after another.

While 10-MLA’s quitting the party to join the BJP in 2018 was the biggest jolt it received, it was the young blood like Sankalp Amonkar, Pratima Coutinho, Varad Mardolkar who kept the flag flying high.

However, on Friday March 26, came another shocker for Congress when their most aggressive young leader – Pratima Coutinho quit the party and joined the Aam Admi Party (AAP) after meeting the party supremo Arvind Kejriwal in New Delhi.

The development has come as a big jolt for the party as she was the one who led several agitations and had somehow become the face of Congress after senior leaders failed to revive the party.

Speaking to Goemkarpon, Pratima said the decision as not overnight and was taken after a thoughtful protest.

She said the Congress today is a sinking ship which does not want to save itself.

Pratima, now a Aam Aadmi Party leader, said that AAP is the only option for Goans who love their land and want to protect Goa.

Speaking to media-persons at Panaji for the first time after joining AAP she said it was not an easy decision for her.

“I have taken this decision with a heavy heart,” she said.

Pratima, which had become a household name after she launched campaigns of selling commodities at subsidised rates due to inflation, said she got calls from BJP and Congress leaders from Goa as well as Delhi offering her various positions after it was known that she was quitting the Congress.

“But I did not go by those promises and joined AAP after a two hour long meeting with Arvind Kejriwal,” she said.

While disclosing that Kejriwal had told her that she would be the face of AAP in Goa, she said it was a responsibility given to her to build the party which she said she was willing to do “AAP shall be built like how I developed the Mahila Congress in Goa by taking up issues affecting the common man,” she said.

Pratima said she was used by the Congress as bonded labour and asserted that Goa and Goans are her first priority and expressed confidence that AAP will save Goa.

“I joined AAP because of its ideology and because it is a secular party,” she said while pointing out that even Girish Chodankar had said that AAP was growing in Goa.

She said Kejriwal had assured her that women will be quite prominent in AAP and said she would get elected to the next assembly but refrained from naming the constituency.

“I have worked like a loyal soldier to the Congress for 24 years and now with the AAP I will give my 100 percent and I know Mr Kejriwal will acknowledge my sacrifice and hardwork,” she said.

She further revealed that she was against contesting the Navelim ZP elections but the State party leaders as well as central leaders asked her to do so in the interest of the party.

“They used me as a sacrificial lamb. The so called senior leaders did not work for me. The situation in Navelim for Congress was hopeless but it was due to my name, we could manage 2500 votes,” she said.

Replying to a question she said wait and watch how many more people would join AAP now.

AAP Goa convener Rahul Mhambre while welcoming Pratima said her decision has enthused the party and said Pratima with her new symbol of broom will clean the political atmosphere in the State. Capt Venzy Viegas urged all people who love Goa and want to protect it to join AAP.