Congress is in process of declaring seat sharing agreement with GFP: Chidambaram 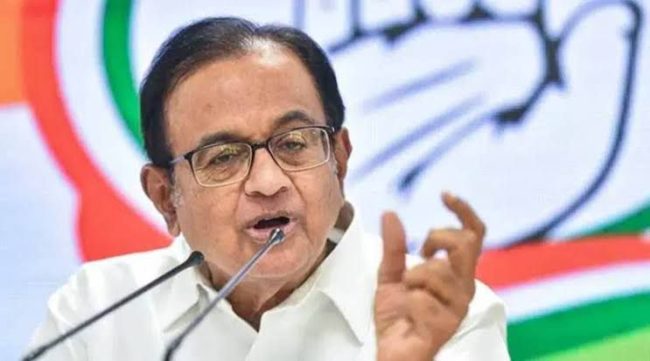 Chidambaram also said that the Congress party manifesto will be ready within the next few days.

“We are working on the seat sharing formula with our alliance partner Goa Forward Party. We will give a stable government to the people of Goa; the people of Goa are wanting a change,” said Chidambaram

He further said that that the Congress manifesto will be ready in the next few days and it will include the suggestions given by various NGO’s.

He further asserted that only his party has the capacity to defeat the BJP.

Chidambaram said that loyalty to the party and the electorate is the first criterion for selecting candidates for the elections and expressed confidence that when elected, they will remain loyal to both the party as well as the electorate.

“Congress only party that has deep roots in all the 40 constituencies of Goa is the Congress and the people know that it is only the Congress that has the capacity to defeat the BJP despite the latter’s “money power and misuse of state power,” he said

On whether the Congress would announce a chief ministerial face ahead of polls, Chidambaram pointed out that he has said that after all the Congress candidates are announced, in consultation with them, “we will take a call whether it is desirable to announce a CM candidate before the election”

Goemkarponn desk Delhi Power Minister Satyendar Jain stated that both the Congress and the BJP have failed to develop better infrastructure in Goa. If the ... Read More

Lobo exposes himself by wanting to join back BJP: Joshua

Goemkarponn desk PORVORIM: BJP Mapusa MLA Joshua D'Souza said that Michael Lobo is exposing himself if he wants to return to BJP. "It is their ... Read More