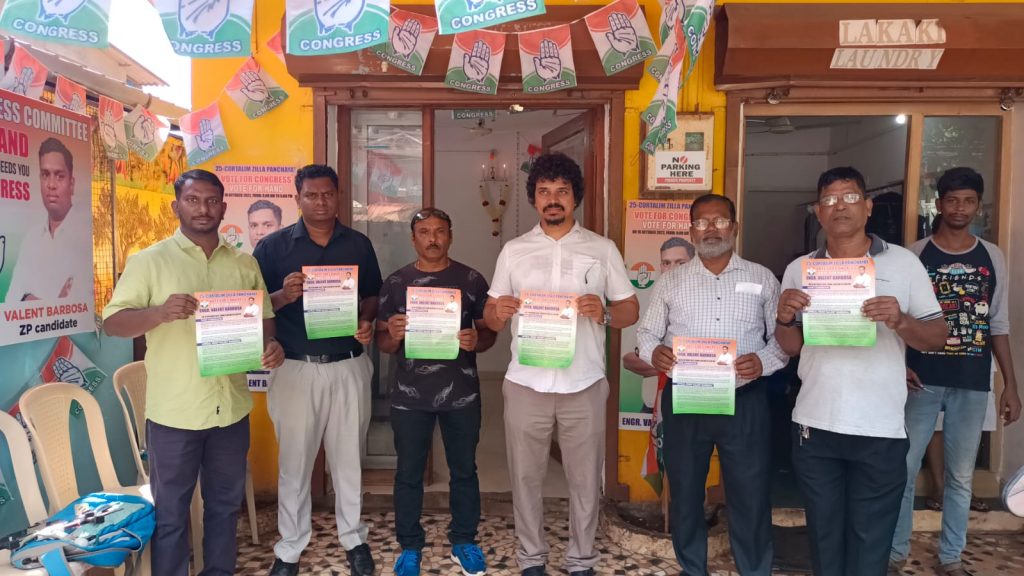 Goemkarponn desk
CORTALIM: Cortalim Congress ZP Candidate Valent Barbosa on Saturday opened his election office in the presence of Cortalim leader Olencio Simoes, congress block members and a large number of supporters.
Valent Barbosa later also released his manifesto and assured that he would work for the people and bring in a lot of development work.
“I only want to tell the people that their primary issues of water supply, power failures and farming issues will be resolved. I want to work for the people, and while many people are upset with politics, it is important to get the right and young candidate elected. Educated Young people don’t have jobs, and industrial estates in our own Constituency don’t offer us jobs, and we need to have good leaders,” said Barbosa.
Congress block president Peter D’Souza said that the office was in the heart of Cortalim and would be accessible to everyone.
“Valent Barbosa is an engineer, but he has entered politics to bring about a change, and his list of works in his manifesto speaks volumes of his intentions. While he wants to work for the people, it is only possible if he is elected. People may be upset with the Congress, but we must realise that there has been no defection in Cortalim and Congress was the party that gave us our freedom,” said Dsouza.
Meanwhile, Congress leader Olencio Simoes said that the people of Cortalim Constituency had always given a good lead to the party during all elections from the Cortalim area and appealed to the voters to continue the support to Congress and get Valent Barbosa elected with a huge margin.
“We have inaugurated our office and realised our manifesto highlighting the issues and solutions to various problems faced by the people. People are frustrated with the previous ZP, Anton Vas, who claimed to be an independent candidate but became an MLA and extended support to BJP within hours. Vas has also said that BJP Government is giving him full support and people must realise that there has been no defection in Congress from Cortalim,” said Simoes.