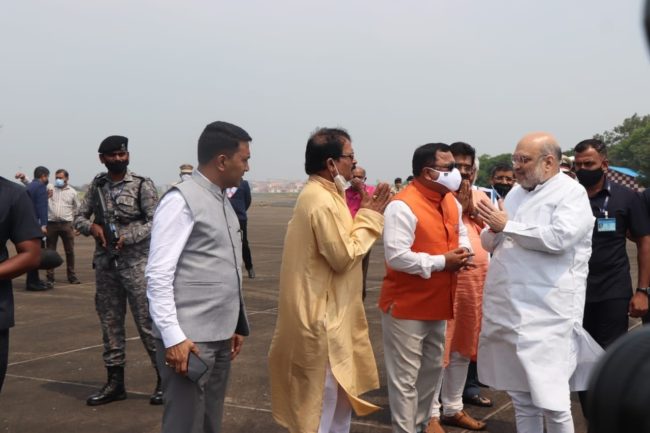 Goemkarponn desk
PANAJI: With just a few months left for the Assembly elections, there is some bad news for the ruling Bharatiya Janata Party (BJP), as the BJP High Command is seriously contemplating replacing Chief MInister Dr Pramod Sawant with Union Minister Shripad Naik.
It is being said that the Union Minister Amit Shah and BJP President JP Nadda expressed displeasure over the Goa Ministers (two) complaints of Sawant’s functioning.
This was conveyed to Sawant, BJP State president Sadanand Shet Tanawade and Satish Dhond.
BJP’s Goa incharge Devendra Fadnavis was also present for the meeting.
The main discussion was the cracks that have resurfaced in Chief Minister Dr Pramod Sawant’s cabinet.
The final decision in this regard is expected within a day or two, said sources.
According to highly placed sources in the BJP, the rift between Chief Minister Sawant and Health Minister Vishwajit Rane has resurfaced.
It may be recalled that the two were at loggerheads over the Oxygen shortage issue and COVID19 purchases scam, resulting in CM taking over the monitoring of Oxygen supply.
The BJP high command, including Home Minister Amit Shah, had to intervene to resolve the issue then.
Now, sources say, there is a fresh spat between the two, again over purchases.
“Bills of over Rs 120 cr have not been cleared by the Finance Department, which has irked the Health Minister. He refused to attend the assembly and also refused to answer calls of all BJP leaders and Chief Minister,” sources said.
The Health Minister had appointed a joint purchase committee to buy all required material for COVID19, bypassing the Finance Department. But now, the CM has scrapped the JPC and appointed new officials of the Finance department as its members. The FD officials are now has pointed several discrepancies in purchases.
Secondly, what has irked the CM is that the PPE kits and the other emergency material are still being purchased at Rs 1800, which was the rate during the initial days of COVID19.
“Today, PPE kits are available at Rs 180 to Rs 450, but yet the PHD is purchasing them at Rs 1800,” said a highly placed source.
It is not very clear yet whether the Health Minister has complained to party high command in Delhi.
This is one of the reasons for the three – CM, BJP State President Sadanand Shet Tanawade and Satish Dhond being summoned to Delhi.

Sources say that during his two-day visit to Goa, Amit Shah interacted with all Ministers and MLAs.
During this discussion, Panchayat Minister Mauvin Godinho complaint to Shah about the arbitrary decisions taken by the CM.
Godinho was irked by the decision to scrap the Bhumiputra Bill, which was his pet project, as it would have benefited his vote bank.
Godinho has also informed Shah that the CM’s “Sarkar tumchya dari” initiative is a failure and will bore no fruits.
He has asked the Union Minister to take corrective measures or the party would face massive defeat in forthcoming elections.

Decision on alliance will be taken at a later stage: CM

DABOLIM: Chief Minister Pramod Sawant, who arrived in Goa this early morning from Delhi, informed that he had gone for a party meeting regarding assembly elections.
“I had gone to Delhi to attend the BJP meeting in regards to assembly election. Let me inform you all that decision in regards to the alliance will be taken at a later stage,” said CM Sawant.
Sources reveal that the meeting had been called to chalk out election strategy and decide on candidature, following growing resentment within party leaders for the ticket for the upcoming 2022 election.
Also, the recent rift between Sawant and Health Minister Vishwajit Rane, which was made public by media, is also worrying the party high command. Rane had reportedly raised unhappiness towards the functioning of Sawant before Union Home Minister Amit Shah during his visit last week.
All three CM Sawant, BJP State President Sadanand Tanawade and BJP Organization Secretary Satish Dhond yesterday morning left for Delhi, where they refused to speak to media with regards to their visit.

Goemkarponn desk MARGAO: Goyant Kollso Naka has said that it is disappointed with the self - contradictory CEC Report which recommends the transmission lines and ... Read More