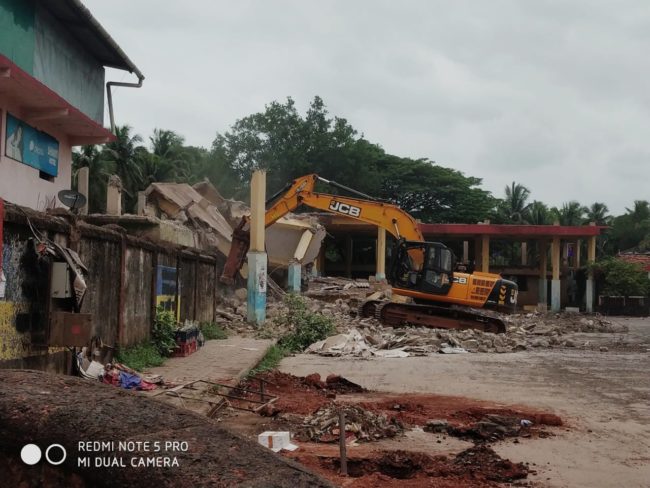 BICHOLIM: The demolition of the Bicholim KTC bus stand began today after a long wait with a ray of hope for its renovation.
The Bicholim bus stand has a long checked history with the laying of foundation stones several times, but the work did not begin inspite of several protests.
The Bicholim block Congress had threatened to go on hunger strike if the government failed to take up the work of the Bicholim KTC bus stand with immediate effect.
It may be stated that the foundation stone of the Bicholim bus stand was done almost a year ago, but after that, nothing happened. The condition of the bus stand was such that it was difficult to get into the bus stand.
“There are big potholes, and the government is not sensitive to the issues of the public. They are just giving assurances, but nothing happens in the taluka,” Block president Meghasham Raut had told.
Two years ago, the slab of the bus stand collapsed, and a woman got injured. It had been almost 20-years since the bus stand was constructed government was trying to eyewash the people.
The bus stand is a 21.5 crore project, and GSIDC is undertaking the project. As per the sources, there will be an RTO office, shops, and a lift for the building. There will be a parking area and other offices too.
The shops from the building were already relocated, and the demolition work finally began today.

Not in favour of alliance with any national party as of now: Sudin

Goemkarponn Desk PANAJI: MGP Supremo Sudin Dhavalikar said that they are not in favour of having an alliance with any national party as of now ... Read More

Goemkarponn desk VASCO: Members of the Congress party and the Murgaocha Raja group from Headland Sada submitted a memorandum to the Chief Officer of Mormugao ... Read More