“Do not want 99 villages of Goa under ECZ”c 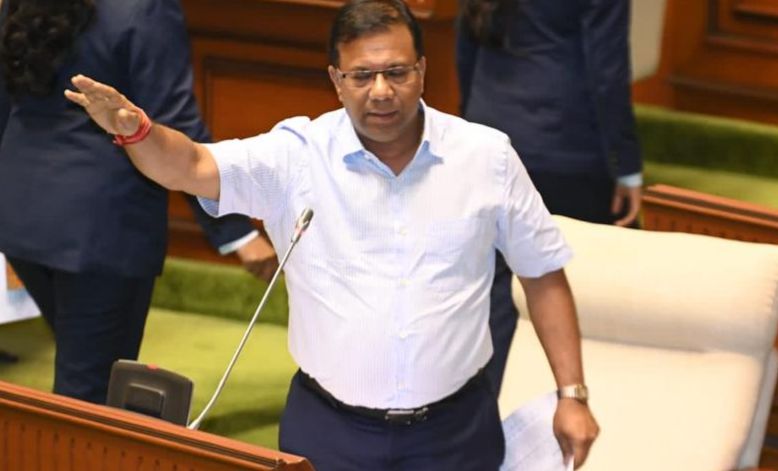 Goemkarponn desk
PANAJI: Minister for Forest Vishwajit Rane today has opposed the draft notification of the Eco Sensitive Zone (ESZ).
Forest Minister Vishwajit Rane also spoke to Chief Minister Pramod Sawant, MoEF Minister Bhupendra Yadav and DG Forests regarding the issue.
“We are not accepting this draft notification of Eco Sensitive Zone (ESZ). Even Karnataka has opposed this draft notification. We, too, are opposing on similar lines,” said Rane.
He further said that people from Sanguem and other villages are upset over the draft notification, and we have to work for the betterment of our people.
“I am clearly saying that we do not want 99 villages of Goa under Eco Sensitive Zone. It is easy for people sitting in cities to comment, but I know the pain of people from villages,” he said.
He further said that the state government must listen to the people’s demands.
“We are against big projects in the forest areas, but we don’t want the villages to be declared as eco-sensitive zones,” he said.
Rane also said that Chief Minister Pramod Sawant and he are on the same page regarding raising an objection.
A draft notification issued by the Union Ministry of Environment, Forest and Climate Change intends to declare 1,461 square kilometres in Goa as the Western Ghats Ecologically Sensitive Area (ESA).
Covered in these 1,461 sq km are 99 villages in Sattari, Sanguem and Canacona talukas. In Sattari, 56 villages fall in the proposed ESA and five villages from Canacona. Sanguem taluka has 38 villages covered.
The draft notification issued by MoEF&CC covers in total a massive 56,825 square kilometres spread over five other States — Gujarat, Maharashtra, Karnataka, Kerala and Tamil Nadu — in addition to Goa as one contiguous Western Ghats Ecologically Sensitive Area.