FIERCE BATTLE on cards as 8 in the fray at Canacona 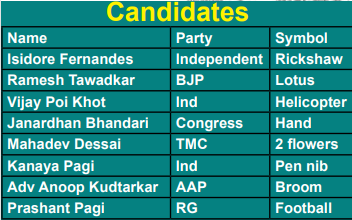 CANACONA: With the acceptance and non-withdrawal of all eight candidates who filed their nominations, all 8 will fight it out in Canacona -40 constituency, the second time over eight candidates after 1989 (at the erstwhile Poinguinim constituency had 9 contestants) in the taluka.
After the day ends for withdrawal on Monday, the contestants in the fray will be Isidore Fernandes (IND- Rickshaw), Ramesh Tawadkar (BJP – Lotus), Vijay Poi Khot (IND-Helicopter), Janardhan Bhandari (INC- Hand), Mahadev Dessai (TMC-Flowers and Grass), Kanaya Pagi (IND- Pen Nib with Seven Rays), Adv Anoop Kudtarkar (AAP- Broom) and Prashant Pagi (RG-Football).
In 1989, when the Canacona constituency was bifurcated into two constituencies into Canacona and Poinguinim constituencies, 9 candidates had contested, which Vasu Paik Gaonkar (INC) won against nearest rival Shiv-Sena’s Govind Acharya and 7 others.
The situation of candidates in 2022 could be similar to the 1967 and 1984 polls, where 7 candidates belonging to different parties and independents fought against each other, respectively.
Ganaba Dessai (5854)contesting on MGP party in the first-ever assembly elections held in the Union Territory of Goa, Daman & Div became the first MLA of Canacona, defeating his nearest rival Raul Bose of UG(1916). After a gap of 5 years, Desai contesting again won the 1972 elections’ again on MGP ticket, this time defeating P D Shrirang Padmanabha of UGS(3441).
Canacona MLA’s 1967 – N.G. M Balkrishna (5126) of MAG defeated UGS M R Desai (2141) in a 7 corner contest, where five others contested as independents. 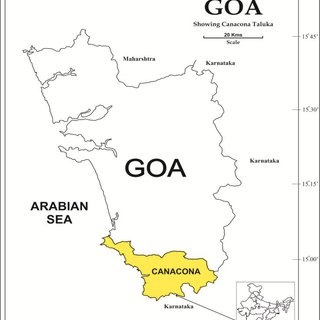 In 1977- Vasu Paik Gaonkar (MAG)(5874) defeated JNPs Gopal Venkatesh Prabhu (3013) and 4 others (all Independents),
1980- Vasu Paik Gaonkar (INC)-8855 defeated MAGs Tukaram Namshikar (3852) and a JNP(S) candidate.
1984- Vasu Paik Gaonkar (INC-7031) defeated his nearest rival the first woman candidate ever to contest in Canacona and first woman Chief Minister of Goa-Shashikala Kakodkar (3973) contested from Canacona against her former colleague in MAG as Independent. The other contestants were Suresh Kankonkar -Independent (2499), Martinho Menino Fernandes (IND)-699, BJP making a first-time appearance in Canacona polls with Prakash Shamba Dessai (BJP) polling a poor 289, MAG’s Ulhas Shanta Faldessai (174) and Sadanand D Prabhu (IND)-49.
In 1989 Canacona was bifurcated into two constituencies as Canacona and Poinguinim. Incidentally, when the Canacona constituency was delimitated into two constituencies in the year 1989, the first-ever bifurcated Poinguinim constituency was again won by Vasu Paik Gaonkar (4192) defeating SHS’s Acharya Govind R C(4107) and 7 others(6 independents and 1 GLP, besides INC) candidates. In that year, Poinguinim had the first local woman Kashibai N Painginkar contested and could bag only 26 votes.
The only other woman to ever contest from Canacona constituency so far was in the very next year 1994 when Inacinha Fernandes contested as Independent and could bag only 134 votes, which were, however, more than the BSP Candidate’s (Soiru M. Komarpant) 96 votes, which INC(Congress) candidate Sanjay Bandekar (6178) won defeating MGPs Dr. Shaba Naikgaunkar (4881). UGDP’s Ghurko Velip got 460 votes in a 5-corner contest in 1994 assembly elections.
In Poinguinim Govind, Acharya (MGP-4516) defeated Vasu Paik Gaonkar (INC-3400) and 2 others, including Isidore Fernandes making his debut as an Independent and polling 2316 votes.
1999-In Canacona INC’s Sanjay Bandekar (4849) defeated BJPs Vijay Poi Khot (4678) and 3 other contestants., Whereas Isidore Fernandes (4860), contesting as Independent, defeated Govind Acharya (MGP-3201) and two others including BJP making its debut in Poinguinim with just 496 votes.