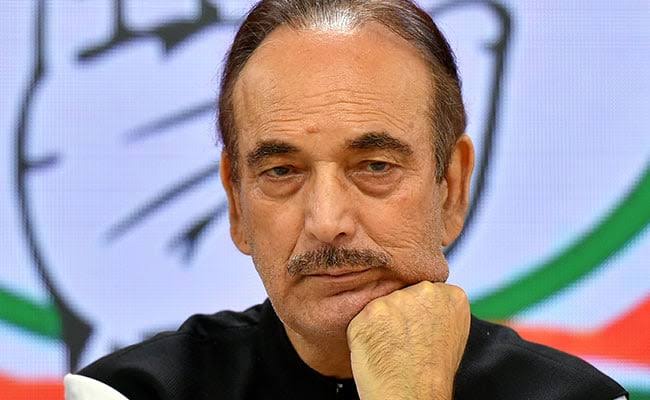 New Delhi: Ghulam Nabi Azad, who quit the Congress today with a scathing critique of the Gandhis, mainly Rahul Gandhi, is likely to launch a new party in Jammu and Kashmir, sources say.

Sources close to Mr Azad say he wants to mark his presence in the region ahead of elections due later this year.

Mr Azad, 73, quit the party days after he rejected a post in the Jammu and Kashmir Congress saying his recommendations for appointments had been ignored

Today, the veteran leader slammed the Gandhis with a five-page resignation letter accusing Rahul Gandhi of “childish behaviour” and immaturity and of letting a “coterie of inexperienced sycophants” run the party.

Mr Azad wrote he joined the Congress in Jammu and Kashmir in the mid-1970s, “when it was still a taboo to be associated with the party, given its chequered history in the state from 8th August 1953 onwards – the arrest of Sheikh Mohammad Abdullah being the nadir of its political myopia.”

His resignation comes ahead of the 2024 national election and amid signs that the election of a new Congress chief will be delayed yet again. The Congress is focused towards a “Bharat Jodo Yatra” to be led by Rahul Gandhi next month.

Mr Azad, a former Union Minister and Rajya Sabha member, was among the party’s tallest leaders and the Congress’s face in Jammu and Kashmir.

If he forms a new party, he has the option of tying up with regional parties in Jammu and Kashmir or partnering with the BJP, which would vastly gain from a face like Mr Azad in the region.

Before him, former Punjab Chief Minister Amarinder Singh also floated his party after quitting the Congress. He tied up with the BJP for the Punjab election but failed to make a mark.

Mr Azad is among the few leaders to enjoy goodwill across the spectrum. After his Rajya Sabha membership ended last year, Mr Azad reportedly received invites from parties like the Trinamool Congress and Sharad Pawar’s NCP.

However, his bonhomie with Prime Minister Narendra Modi stands out.

PM Modi shared an episode when they were both Chief Ministers – of Gujarat and Jammu and Kashmir. He referred to a 2007 terror attack in Jammu and Kashmir on visitors from Gujarat. “I will never forget Shri Azad’s efforts and Pranab Mukherjee’s efforts when people from Gujarat were stuck in Kashmir due to a terror attack. That night…Ghulam Nabi Ji called me…,” he recalled, fighting tears.

Describing Mr Azad as a true friend, the PM said: “I would not let you retire, I will continue taking your advice. My doors are always open for you.”

Mr Azad was a leading member of the “G-23” or the group of 23 leaders who wrote to Sonia Gandhi in 2020 alleging a leadership drift and urging major reforms.

Comments When he was honoured with a Padma Bhushan this year, many in the Congress said it was because of his proximity to the Prime Minister and the BJP. (Source Ndtv)