* To win the Mhadei battle, scientific study on the Mhadei river should be presented in SC, he says 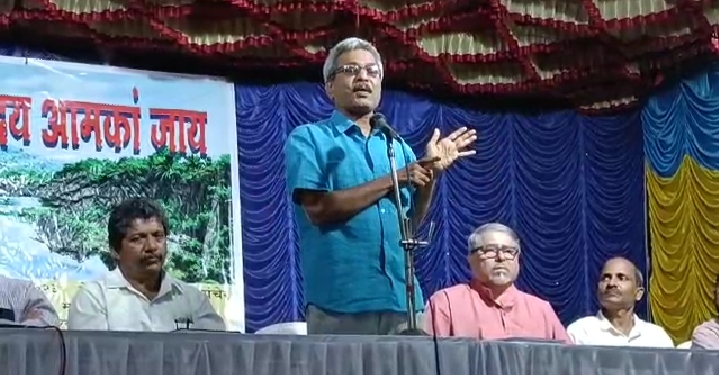 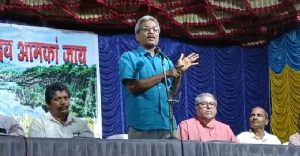 Goemkarponn desk
PONDA: Environmentalist Rajendra speaking at a Public meeting on the Mhadei issue at Marcel, said Goa approaching the Mhadei water tribunal for water sharing was a mistake.
“Now, to win the Mhadei battle, scientific study on the Mhadei river should present in SC,” he said.
He said in the past, Karnataka had claimed with the Centre that abundant water flows in the Mhadei basin flowing in the Arabian sea.
“Based on their claim Central Water Commission conducted a study wherein it was wrongly informed that 188 TMC feet of water exist in the Mhadei basin. Because of this wrong information, today, we are facing the Mhadei issue,” he said.
Kerkar added some two decades ago had urged Our resource person, a scientist, to submit their study on the issue and impact of diversion. However, it did not happen.
“I even wrote articles opposing Goa taking water sharing issue with Mhadei tribunal, but nobody listened to me. There was a need to read the 1956 Tribunal law, but nobody listened to me and today tribunal gave the verdict. People need to read and study it. Even in 1999, after the formation of Mhadei and Netravali Wild Life sanctuaries, Goa failed to use it as a shield to prevent Mhadei diversion,” he charged.
He said to win Mhadei battle scientific study on Mhadei river should be presented to the Supreme Court.
“Two days assembly session on Mhadei river needed in Goa Assembly to literate MLAs on the issue,” he said.
He said the Goan politicians talk about Mhadei without understanding the issue.
“As most MLAs are unaware, the exact side must be presented in the Parliament and other platforms. 43% of the state’s population is dependent on the Mhadei River for water needs,” he said.
Kerkar further said that staging protests and hunger strikes won’t save Mhadei, but to save our lifeline river, Goa needs to strengthen its case in the Supreme Court with the proper environment and ecological scientific study of the river and laws related to it.
“There is no point in saying we will not allow even a drop of Mhadei to Karnataka, and in reality, Karnataka has already diverted water from Goa,” said Kerkar.
He said the existence of the tiger has been confirmed in the state.