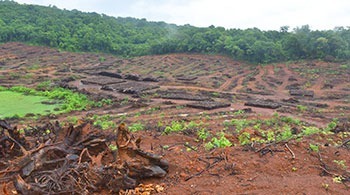 PANAJI: Goa Foundation on Friday rejected the claims of the Tamnar Power project officials that only 14,000 trees will be cut for the 400 Kv High Tension Power Line project.
The Foundation released documents to show that the actual extent of trees needed for the project from Narendra in Karnataka to Xeldem in Goa is 1,31,082 trees, further adding that most these trees fall within the biodiversity-rich Western Ghats region and its ESAs (Eco Sensitive Areas). Foundation presented documents comprising of applications for forest clearance or for permission under the Goa Protection of Trees Act, 1984 obtained under RTI and also information available in public domain from MOEF’s website.

The project requirement for the Karnataka side is 62,289 trees, whereas in Goa, it is 68,793, the Green NGO alleged. The project has already felled 2,849 trees in Sangod village. Giving details of the tree cutting Foundation said, “For the Sangod-Mapusa stretch, the Tamnar Project has sought permission for diversion of forest land involving 18,427 trees. From Goa border to Xeldem, the number of forest trees sought to be diverted is 15,772. From Xeldem to Sangod, the number of trees listed for forest clearance is 9,002.”
Tamnar Project has also sought the approval of the Goa government to short circuit its applications for 22,140 trees to be felled in private properties by excluding the trees from the purview of the Goa Protection of Trees, Act, 1984. The permission has since been granted by the Chief Minister himself, despite the fact that the application has been made by TAMNAR and not the individual landowners, the foundation added while presenting a copy of the file noting obtained under RTI, dealing with the approvals granted for the same to corroborate its claims.
Goa Foundation further pointed out that MoEF&CC has permitted the loss of these trees to be compensated by growing trees in Karnataka and Goa government will be paying the Karnataka government the money to raise “compensatory afforestation” in several districts of Karnataka.