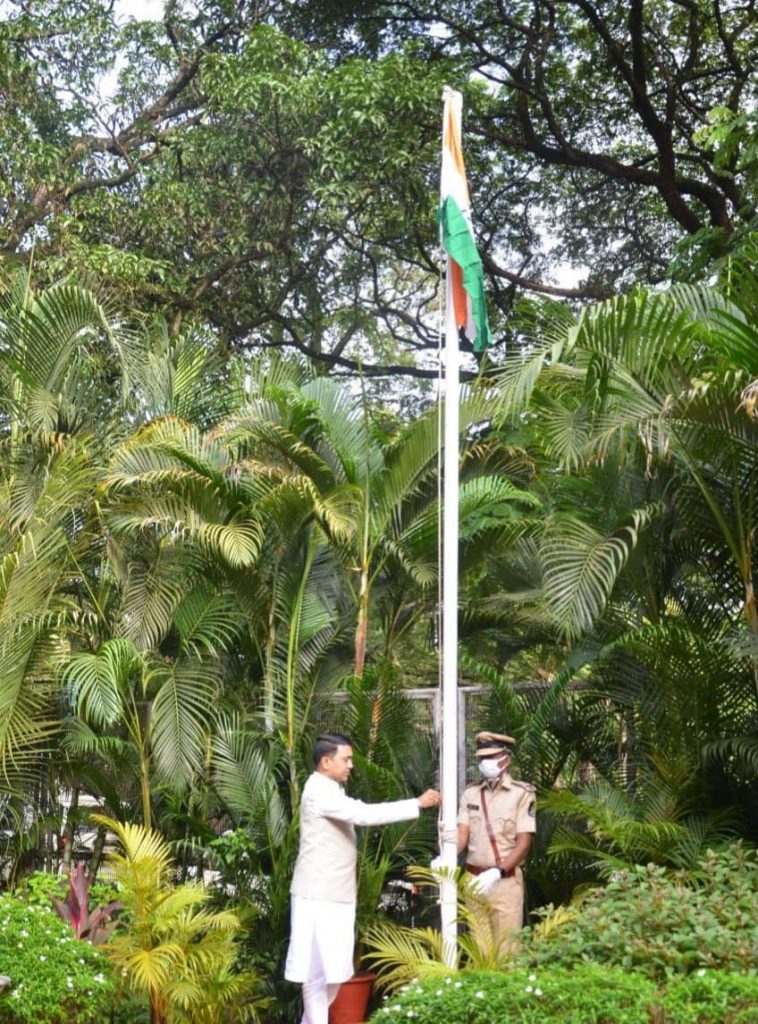 Goemkarponn desk
PERNEM: Chief Minister Dr Pramod Sawant said as a part of 75 years of Azadi ka Amrut Mahotsav’ celebrations, the Government has decided to renovate each and every martyr’s memorial monuments in the State – be it from Patradevi, Polem Check post or from Castlerock. Government will see that no monument will be left behind for renovation. Government will preserve all these sanctified structures as remembrance of the freedom struggle.
The Chief Minister, Dr Pramod Sawant, unfurled the tricolour to mark the celebration of India’s 75th Independence Day at a function held at the Memorial of Freedom Fighters at Patradevi, Pernem taluka today. He said this year we were celebrating Azadi ka Amrut Mahotsav and announced that this year will be dedicated to ‘Rastrvad and Rastraprem’ by organizing various programmes in every school, panchayat, talukas etc.
While celebrating 75 years of Azadi ka Amrut Mahotsav, the Government will felicitate each and every freedom fighter who has sacrificed their lives during the freedom struggle. Pernem taluka is a ‘Vir Bhumi’ as many freedom fighters from this Taluka had sacrificed their lives during the freedom struggle.
The two main and special projects – Mopa International Airport and symbol of freedom struggle Martyrs Memorial(symbol of freedom struggle) will be inaugurated soon, ushering in the development of Pernem taluka, he remarked.
He mentioned that the youth and students have the power in their hands to develop this nation into Navbharat. He said while celebrating 100 years of India’s Freedom struggle, we need to supplement the Prime Minister’s ideas to develop ‘Navbharat’. Everyone needs to write a five ‘Sankalp’ that is India’s Freedom Struggle, ideas @ 75, resolve @75, Action @75 and achievement @ 75 and we need to try to complete these Sankalp within 25 years before celebrating 100 years of India’s Freedom struggle.
The Chief Minister, on his arrival, placed a wreath to pay rich floral tributes to the martyrs. As part of the celebrations, he inspected the guard of honour and took the national salute.
The students of Bal Bhavan Kendra presented patriotic songs.
Jit Arolkar, MLA, Shri Vinay Tendulkar, Raj Sabha Member, Sanjiv Gadkar, IAS Secretary Home, and Shyamsundar Kalangutkar, freedom fighter, were present on occasion.
Pravin Arlekar, MLA Pernem, welcomed the guests.