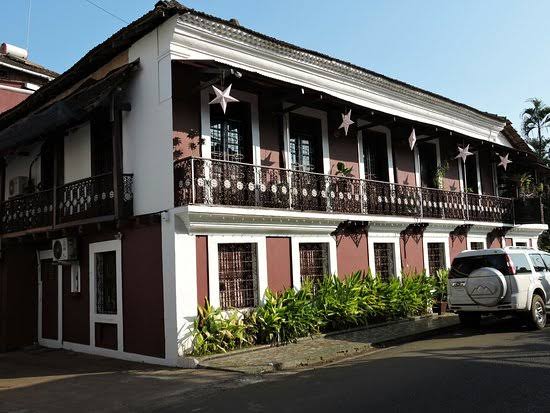 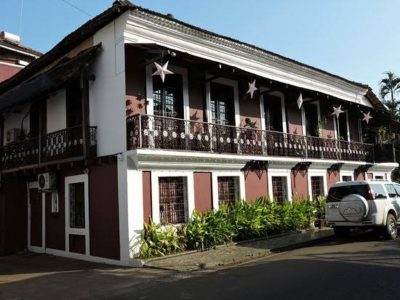 “Most of our built heritage, in Goa, has been designed with nature, from prehistoric caves to medieval forts, there has been a consistent thought process to “use what is there to your advantage”. This is even more evident in the vernacular architecture of the state — our ancestors have derived a built form from close observations of our climate, biodiversity and the nature that surrounds us. The very soil we stand on – is used in traditional rammed earth structures. Further on sieving our soil , red ‘Kaav’ has also been used to develop intricate patterns alongside lime-plaster that has adorned walls of our sacred and prominent structure. Biodiversity is not just the flora and fauna that live there — but the intricate network of their interactions climate, topography, water, humans and their influence- complex, delicate and unique, studied and written about extensively by environmentalists.”, says Architect and Art Conservationist Rhea D’Souza.

It has been nine months now, under COVID lockdowns and government-led restrictions that the people of Goa have been consistently fighting the idea of turning the state into a ‘Coal Hub’. The three infrastructure projects, cutting the Western Ghats (global biodiversity hotspot and a UNESCO World Heritage Site) into three large fragments threaten to endanger protected forest land, its bio-diversity and 100-years of heritage that has been living symbiotically and sustainably with the people of the state.

The South Western Railways (SWR) state they are “not acquiring any new land” and are only improving connectivity through the Western Ghats for the sake of tourism and defence procedures. Students and residents have been repeatedly requesting for data proving the same that would help mitigate the rumours of the double-tracking used as a coal corridor instead. (1) The lands mentioned by SWR were in design plans drawn during the Portuguese rule of Goa till 1961. To bring them into play now will displace its people in the name of development.

Quiet spectators to this destruction are the numerous heritage buildings that dot the surroundings of the projected track that would run across close to 25 villages in South Goa.

According to the late historian Paulo Varela Gomes, Goan architecture “constitutes an extraordinarily coherent and distinct current in the panorama of housing around the world. These houses are now being named ‘Portuguese Houses’ … (but) houses such as those in Goa exist nowhere in any town or village in Portugal, Brazil, or Portuguese-influenced Africa. They are solely Goan.” The GHAG letter to CEC also spoke of the increasing demand for home-stay tourism in Goa which according to local operators already hosts over 6000 tourists per year. These home-stays are often in heritage houses with friendly and culturally enriching interaction with Goan families.

These very structures currently face the consequences of an industry that use the state only as a transit medium. The current single meter track gives way to trains that cover 352 kilometres with 58 wagons carrying 3,800 tonnes of coal from Mormugao Port (Goa) to Toranagallu (Karnataka) during each trip. Nine such trips (34,200 tonnes/day) have been documented every day from the port across Cansaulim, Arrosim, Velsao, Sanvordem, Chandor, Majorda, before reaching Kulem just short of the Western Ghats. Here the trains need about 5 engines aiding the wagons to push the coal up the Ghats and over into Karnataka where its final destination is at the steel factories of JSW in Toranagallu.
Houses and communities surrounding this track already face difficulties as trains make around-the-clock trips and hurtle through the quite serenity that is slowly disappearing.

Heta Pandit, Co-Founder Goa Heritage Action Group said, “Hinterland tourism is not only a growing revenue generator for the state but can safeguard our position on the global tourism map as it provides a buffer when the coastal belt is closed during the monsoons. The GHAG in its letter pushes for a Cumulative impact assessment of all three projects that cannot be looked in isolation. They also urge the Committee to reconsider the alignment of the proposed double track railway line that will potentially damage the heritage buildings along the track. As far as we know, no studies or surveys or inventories have been conducted that evaluate the cultural, social, historic, architectural, archaeological or group value of these heritage structures and natural sites. How can we destroy something without knowing what is there and assessing its value?”

The Rs 2,127 cr project also threatens the Bossuet Barros Pereira home built in 1828, listed as a “protected heritage home”, and St Lawrence Chapel at Arossim built in 1598. Lands belonging to former chief minister Luis Proto Barbosa and former tourism minister the late Matanhy Saldanha, who was a staunch environmentalist himself, also figure in the land acquisition notices. Ancestral homes with generations of history are sitting ducks in an ‘expansion’ that nobody but the government and their allies benefit from.

Ever since double-tracks were spotted at the Karnataka border back in 2017, locals have tried to reach out by submitting memorandums to the Deputy Collector, Chief Secretary and to the local MLAs like Alina Saldanha to scrap the project. Until then the fate of these time-bound structures victimised by toxic trains, are red-marked and are yet to be decided by the SWR and the Government.

With a single-track railway line causing enough damage already and the government not placing enough regulations to transport the current 12.75 million tonnes (2016-17) brought into the state prudently, a 300% increase coal intake seems to be nothing short of reckless. These heritage structures that have been built and restored over 80-100 years are already under duress and will not be able to stand for too long if things go as planned.

“The character of Goa is defined by the natural and built heritage of the state and loosing this to projects that destroy this is in a way loosing our identity. The railway line is a scar that runs through the heart of our villages and while the single line has caused disturbance, a double lining especially with the millions of tons of coal envisioned passing on it so close to residences is surely a disaster. Sustainability is about continuity and while change is inevitable with time we have to ensure it is kind and for the better. To compromise the lives of people and term it development is absurd, and if this so-called development is needed alternatives is the need of the hour”, concluded architect Dean D’Cruz.