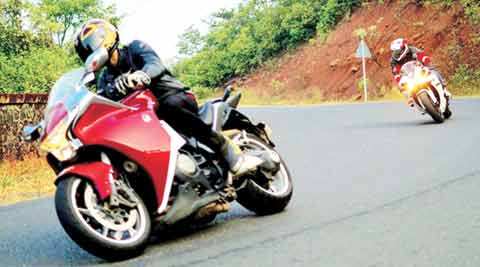 Margao: The Goa Police seems to have taken the minor children’s in Goa driving two-wheelers on public roads, thereby endangering their lives, very seriously and urged the police stations and traffic police to act tough against the law-breakers.

In his petition dated 08/03/2020 has mentioned that minor children’s in Goa are driving two-wheelers on public roads, thereby endangering their lives.

The petitioner had further mentioned that the law enforcement agencies (Police and RTO) are not seriously working to stop the same and punishing lawbreakers. The petitioner has given suggestions to issue instructions to Police department to use beat system effectively to stop this unlawful activity

Following this complaint, the Superintendent of Police, Legal and Vigilance wrote to SP North, SP South and SP traffic to file a report in this regard.

“With reference to the above, it is to inform that as desired by superiors you are requested to give a suitable reply to the petitioner Sanjay Sawant Desai, r/o Shirodem, Margao Goa under intimation to this office and the Under Secretary (Public Grievances). Secretariat. Porvorim-Goa with 05 days on receipt of this letter,” the letter from SP L&V said.

All three SPs said they have given orders for strict implementation for law.

SP South Pankaj Kumar Singh, IPS in his reply said “It is informed that the contents of the reference had been duly noted by the 1/Cs of Police stations in South Goa District and also brought to the notice of all the Officers of their respective Police Stations with the direction to book cases if any minor found riding two-wheelers on public roads.”

Utkrisht Prasoon, IPS, SP North says the The petition is forwarded to all SDPOs in North Goa district with instruction to direct all officers and staff accordingly and keep strict watch in their Police Station jurisdiction.

“If any minor found riding two wheeler on public road, strict action should be initiated against the owner of the vehicle under the provision of law,” he said in a reply.

Besides, he added, the road safety awareness lectures are delivered regularly to students in schools and other educational institutions by Traffic Police.

“Similarly, lectures regarding road safety are also arranged through Parents-Teachers Association (PTA). During the year 2020 till 30/11/2020, 294 cases have been booked against the minors/under age for driving unauthorised and the owners of the vehicle for allowing the underage to drive unauthorised,” he said.