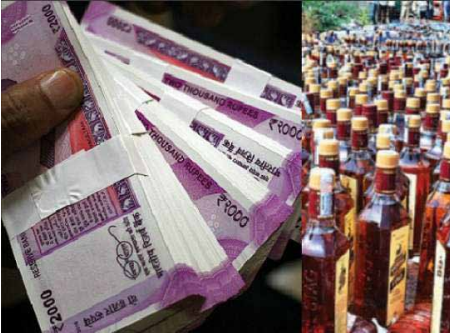 PANAJI: Inspector General of Police (IGP) Rajesh Kumar IPS has informed the progressive seizure of cash, liquor, freebies, precious metals and narcotics in Goa have been to the tune of Rs 12.72 crore.
Assembly elections to 40 constituencies in Goa was held yesterday with a voting percentage of 78. 94 per cent.
“The Goa police also seized Rs 6.66 crore cash during Goa elections while Rs 12 crore worth of gold, liquor, drugs etc., seized,” said IGP.
According to information, cash worth Rs 6.66 cr, liquor worth 3.57 cr, freebies worth 1.20 cr, precious metals worth 0.02 cr and narcotic substances worth 1.28 cr were seized in Goa.
He further said that the Election Commission of India’s Cvigil App is a citizen-centric mobile application that empowers people to report MCC violations on a real-time basis, with populated auto details of location, etc. and responded within 100 minutes after verification at field level.
Since the implementation of MCC, a total number 6 of 612 cases of Model Code of Conduct violations were reported through the cVIGIL app from Goa, of which all cases were disposed.
Kumar, this is the highest seizure in elections held so far in the State. The seizures included Rs 6.6 crore cash seized by the Income-Tax officials at the instance of police at Margao, Rs 3.57 crore worth liquor, gold and silver worth Rs two lakh and Rs 1.275 crore worth drugs. The total liquor seized during the election was 85,445 bulk litres.
IGP Kumar said that the Goa police also took preventive measures against 1700 persons. The police called history sheeters, bad character persons, and the Police Inspectors (PIs) visited their houses and warned them not to indulge in any anti-social activities during elections.
The Goa police also received 38 minor calls, but no serious complaint was to be converted into a crime.
The Chief Electoral Officer (CEO) has initiated action into the sting operation video broadcast on a television channel following complaints filed by Congress, All India Trinamool Congress (TMC) and Aam Aadmi Party (AAP).
On the eve of polling in Goa, a news channel had broadcast a video claiming that one TMC and three Congress candidates had taken bribes to change their party affiliation to BJP in case they win the Assembly polls scheduled on February 14.
Speaking to media persons, CEO Kunal said that District Collector North has been instructed to initiate legal action under Section 126 of Representation of People’s Act. “The proper procedure will be followed. We have received the complaints and inquiry has been initiated,” he said.
Section 126 (b) of the Act prohibits display to the public any election matter by means of cinematography, television or other similar apparatus during period of 48-hours ending with conclusion of poll.
Kunal said that directions have been issued to remove the video from YouTube and it was eventually deleted by the news channel that had uploaded it.