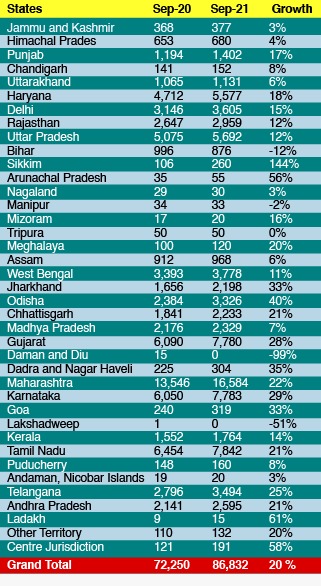 Goemkarponn desk
PANAJI: With the easing of COVID19 norms and the starting of tourism-related activities, Goa has seen a 33 per cent jump in GST collections.
As per the latest data provided by the Union Ministry of Finance, Goa has collected Rs 319 cr in September, which was Rs 240 cr in September 2020.
India’s gross GST revenue collected in the month of September 2021 is ₹ 1,17,010 crore of which CGST is ₹ 20,578 crore, SGST is ₹ 26,767 crore, IGST is ₹ 60,911 crore (including ₹ 29,555 crore collected on import of goods) and Cess is
₹ 8,754 crore (including ₹ 623 crore collected on import of goods).
The government has settled ₹ 28,812 crore to CGST and ₹ 24,140 crore to SGST from IGST as regular settlement. The total revenue of Centre and the States after regular settlements in the month of September 2021 is ₹ 49,390 crore for CGST and ₹ 50,907 crore for the SGST.
The revenues for the month of September 2021 are 23% higher than the GST revenues in the same month last year. During the month, revenues from import of goods was 30% higher and the revenues from domestic transaction (including import of services) are 20% higher than the revenues from these sources during the same month last year. The revenue for September 2020 was, in itself at a growth of 4% over the revenue of September 2019 of ₹ 91,916 crore.
The average monthly gross GST collection for the current year’s second quarter has been ₹ 1.15 lakh crore, which is 5% higher than the average monthly collection of ₹ 1.10 lakh crore in the first quarter of the year. This clearly indicates that the economy is recovering at a fast pace. Coupled with economic growth, anti-evasion activities, especially action against fake billers, have contributed to the enhanced GST collections. It is expected that the positive trend in the revenues will continue and the second half of the year will post higher revenues.
The Centre had also released GST compensation of Rs. 22,000 crore to States to meet their GST revenue gap.