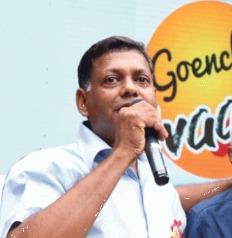 Panaji: Goencho Avaaz has alleged that the ruling BJP was trying to threaten another unopposed candidate from Chicalim.
“In yet another shocking and ruthless subversion of democracy on February 6th, villagers of St. Jacinto Island, along with Goencho Avaaz members, had to rush to the home of newly elected (unopposed) Chicalim Pancha Stephanie Lucas who belongs to the Scheduled Tribe community, when she and her family were threatened and abused by a coterie allegedly owing allegiance to a powerful local MLA belonging to the ruling party,” said Capt Viriato.
He said the ruling group was attempting to intimidate Stephanie Lucas into joining the ruling BJP. The goons belonged to the very same party who’s supreme leader Shri Narendra Modi had given the slogan of BETI BACHAO, BETI PADAO.

“For a long time now, the people of Goa have been watching the imposition of “Might is right” by the powers that be, as the only functioning law of the state. This of course, is only to be expected, when the hallmark of the ruling dispensation itself is consistent undermining of statutory bodies, laws and established procedures, accompanied by blatant disregard and disrespect for the voice of the people. This trend was most evident when 12 MLAs elected by voters on Congress and MGP tickets, were abruptly appropriated by the BJP in order to boost their numbers and enable them bulldoze their destructive projects throughout Goa by weakening the opposition,” he said.

Goencho Avaaz strongly condemns Dabolim BJP MLA Mauvin Godinho for obviously setting his henchmen on a 21 year old new Panch and her family in order to browbeat her into submitting to the BJP. Intimidation and strong arm tactics are the weapons of insecurity and desperation of politicians who are trying to cling to power at any cost. In Dabolim constituency, like the rest of Goa, for the ruling MLAs, there is no doubt that the writing is on the wall.

He said the tolerance limit of Goa’s people has been breached a long time ago. The realization has dawned that unless we the people, stand up to be counted, the destruction of our state and our future will be an inevitable consequence.
“When people stand together for themselves and for each other in united solidarity, even oppressive governments will crumble like a house of cards. For Goa and Goans, that time of second liberation has arrived. Let us march forward together,” he said.