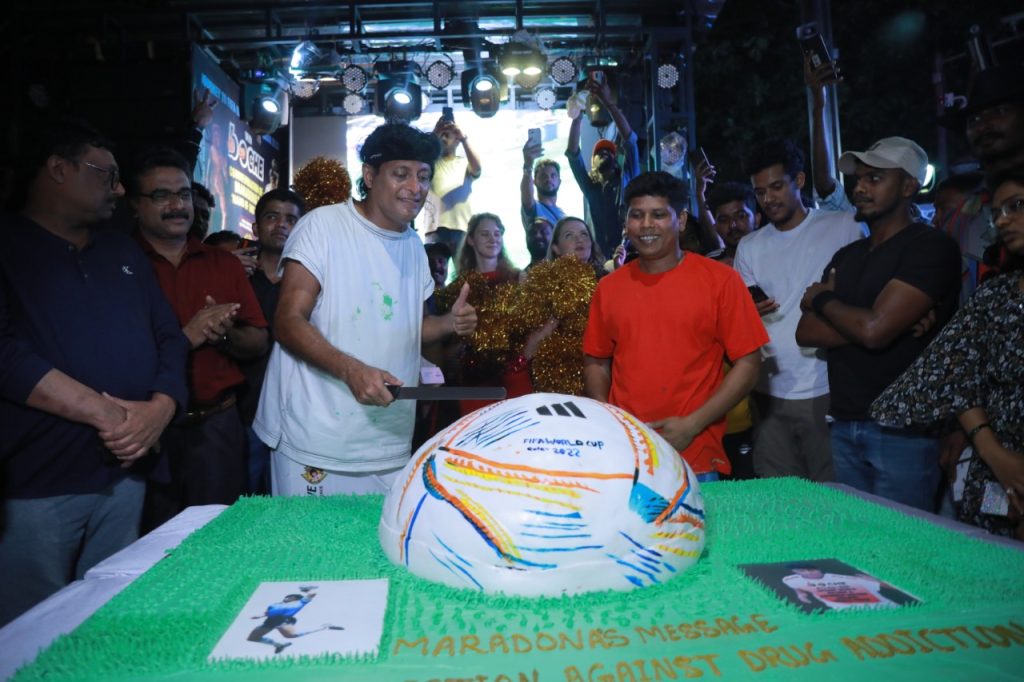 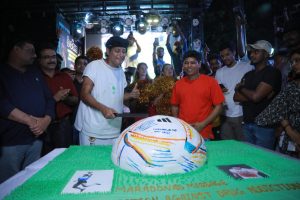 Goemkarponn desk
PANAJI: A cake in the shape of a FIFA football that weighs more than 100 kg has been made at Miramar Beach in connection with the Qatar journey of Boche and his team to spread the message’ Football Addiction Against Drug Addiction.
Boche (Dr Boby Chemmanur), Chairman and Managing Director of Boby Group and 812 Km Run Unique World Record and Guinness Record Holder for World Peace, has embarked on his journey to the Qatar World Cup with a golden statue of his soul mate- Diego Maradona, commemorating his ‘Hand of God’ goal. Football legend Diego Maradona’s golden statue will be presented in the Qatar FIFA World Cup 2022 by Boche. The statue arrived in Goa and was flagged off from Miramar by Rohit Monserrate – Mayor of the Corporation of the City of Panaji and Boche.
The event, which is organized by Boche & Maradona Fans Charitable Trust, started from Thiruvananthapuram, where the Public Works Department & Tourism Minister of Kerala P.A. Muhammad Riyas flagged off the event. People from different walks of life, like students, sports enthusiasts, police and excise officers and the general public, participated in this journey by reciting the pledge and scoring goals against drugs. Now Boche and his team has reached the state of Goa after successfully completing the journey in the state of Kerala and Karnataka.
On this journey, Boche carries his soulmate Maradona’s message of ‘FOOTBALL ADDICTION AGAINST DRUG ADDICTION’ by visiting selected colleges to mobilize students against drugs. The team will travel through various centres in Goa and reach Mumbai and finally travel to Qatar by air. Maradona’s statue will be displayed in front of the major stadium in Qatar and then handed over to a prominent museum in Qatar. When Boche had presented a golden football to Maradona, he had expressed his desire to Boche to have a perfect full-sized golden statue of him scoring the “Hand of God” goal. But Boche could not do so during that time and was adamant about fulfilling his wish. This wish inspired Boche to travel to watch the Qatar World Cup matches with Maradona’s Hand of God goal statue made of gold. Maradona also shared that he was a victim of drugs & he suffered a lot.
Later he relieved and transformed himself, and it was his wish to spread the message of “Football addiction against drug addiction” through Boche & Maradona Fans Charitable Trust. As part of the campus campaign, we encourage the students to take part in the ’10 crore goal kicks’ event, which aims to support Maradona’s message.
Along with that, everyone will take a firm oath against drug addiction and work together to make India a part of the next World Cup Football. Like every football lover in India, Boche is also waiting for the day when India participates in FIFA World Cup football. When Maradona was informed about this, he promised to provide the services of international coaches in collaboration with AFAFTI (Argentina Football Academy Football Technology Institute) to fulfil Boche’s wish. As part of this, Boche is planning a project in collaboration with AFAFTI to mould the best footballers in India. There will be statues of Boche and football legend Maradona in a specially designed opened vehicle. A lucky winner will be selected from those who post and share selfies with these statues and by following and tagging Boche on Instagram. The winner will get a golden football. Those who are interested can follow this journey in vehicles of their choice. They can reel it and post it on Instagram by following and tagging Boche. The lucky winner will be selected through a draw and will be awarded a flight ticket to Qatar and an entry pass to watch the World Cup football match. The social media influencers with more than one lakh subscribers will be honoured with Boche’s Golden Button in the functions to be conducted in various colleges and educational institutions. The programme and other information for each day of the trip will be available daily on Boche’s official Instagram page.