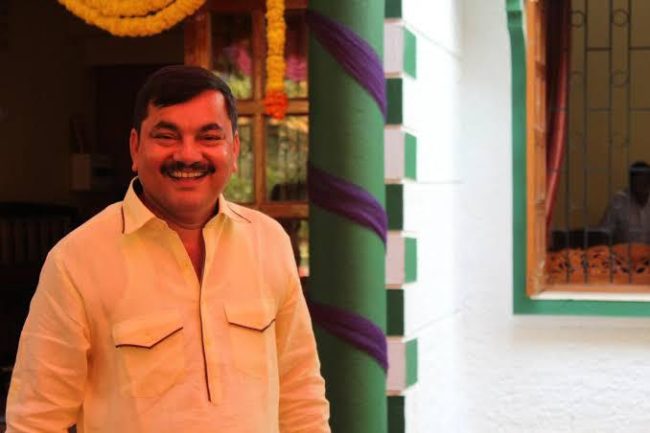 Goemkarponn desk
CANACONA: With just about half an year left for the assembly elections former two time BJP legislator Vijay Pai Khot is seen moving in the constituency to stake his claim for the BJP ticket.
Vijay Pai Khot was the BJP MLA between 2002 to 2012.
Khot didn’t contest the 2012 assembly elections after the BJP party decided to give ticket to Ramesh Tawadkar.
However, the BJP party denied Tawadkar the party ticket in 2017 elections and Khot contested on the party ticket to be defeated by Congress nominee Isidore Fernandes.
Speaking  to Goemkarponn, Khot informed that this is going to be his last election and he will contest irrespective of he gets the BJP ticket or not.
Khot has already started making his moves and has undertaken corner meetings in the constituency and feel confident that he is getting good response from the voters of the constituency.
After Isidore Fernandes switched over to BJP from Congress together with another nine of his colleagues the race for the party ticket has become more hot as, as of now there are atleast three leaders in the taluka who have staked claim for the ticket.
However, there are more leaders in the party who have in more than one occasion has made their intention clear that the party have to start thinking of giving chance to new leaders.
Many in the taluka are however are aware that the BJPs position is same like that of Congress as there are many who have staked their claims for the party ticket and these divisions in the party might cost them the seat this time too they feel.
Khot informed that when Tawadkar was given the party ticket he as a disciplined soldier of the party, withdrew himself from contesting the elections but in 2017 when the party nominated him as the party candidate, Tawadkar revolted and contested as an independent splitting the votes vertically which lead to the success of Congress party candidate.
On being asked what will be his position if he is denied the BJP ticket, Khot informed that his supporters are forcing him to contest the coming elections irrespective of he gets the ticket or not.
However when asked whether he will go independent if the BJP party denies him the ticket, he didn’t deny the possibility and said that he is confident of his victory as he is receiving good support from all over the constituency.
When this correspondent informed him that today everyone from voter to  the prospective candidates talk of development, what development he did in the constituency during his two terms in the assembly, Khot replied saying his first five years went sitting  in the opposition but still he did lot of work informed Khot.
“During my tenure I constructed the KTC bus stand, Canacona Health Centre and many other public utility works.
“Everyone is getting benefits from the ultramodern bus stand and the Health Centre” he informed.
“My supporters are my strength and my supporters wants me to contest the coming elections and I am sure about my victory even if I go solo” said Khot when asked how confident he is of getting elected in the forthcoming elections.