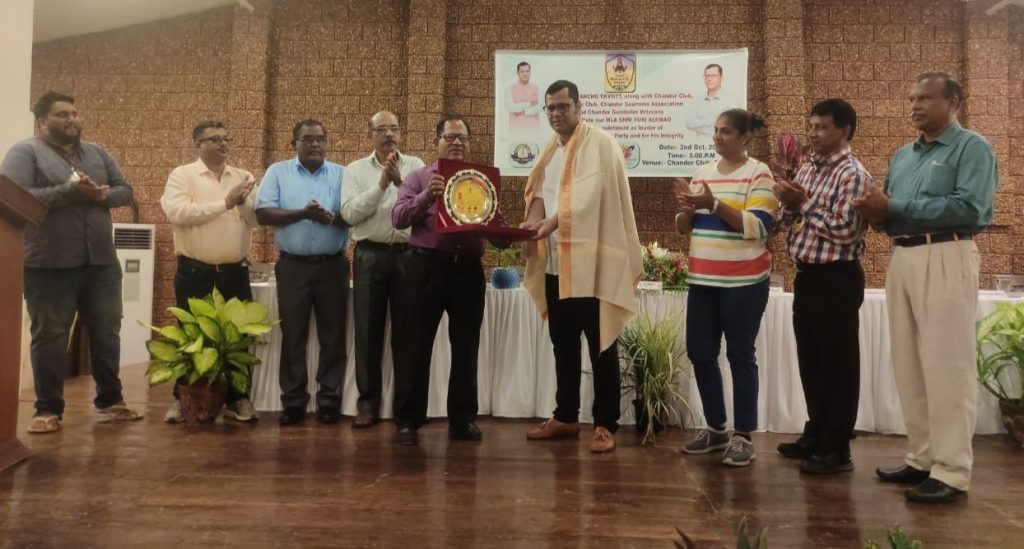 Goemkarponn desk
CHANDOR: “I am committed to upholding the dignity and respect of the people of my constituency. I will not do any act which will compel my voters to put their heads down in shame. I am feeling blessed to get felicitated by my constituents for the first time after getting recognised as Leader of Opposition. I am devoted to the people of Goa,” said Leader of Opposition Yuri Alemao.
He was speaking at the felicitation function organised by Ganv Bhavancho Ekvott, Chandor Club, Guirdolim Club, Seamens Association & Chandor Guirdolim Veterans at Chandor.
“I will work with dedication & honesty to live up to the expectations of the people. I was questioned by the people during the election campaign whether I would defect to BJP for power. It was my promise to them that I would not defy their trust,” Yuri Alemao said.
He said it is the duty of every elected representative to fight for the rights of the people of their constituency. “There is no need to defy people’s mandate in the name of development. I will work hard to ensure the progress of Cuncolim & Goa,” Yuri Alemao said.
Speaking on occasion, Felix Furtado of Chandor Club said that even if no development happens in the constituency, people will stand by Yuri Alemao, who remained loyal & committed to his word.
Patwin Fijardo of Guirdolim Club said that “We are feeling proud & thankful to our MLA Yuri Alemao for defying all offers and standing by the mandate of voters. We assure u of our full support and cooperation to fight in the interest of Goa and Goans.”
“MLAs shift sides for self-development; there is no public interest. We thank Yuri Alemao for giving us the opportunity to hold our heads high with pride by not becoming a defector. Cuncolim Constituency, for the first time, got an MLA who talked in the assembly after proper study of the issue, unlike many others, said,” Joy D’Silva.
Sonia Fernandes, Sarpanch of Guirdolim, while speaking, said I am thankful and pray to god for giving us such an honest n faithful MLA. We may have difficulty in getting development, but we will fight for our rights and save our Goa.
Estefan Dias, Sarpanch of Chandor, addressing the gathering, said that We are blessed and happy to have a faithful MLA like Yuri Alemao. I am sure that under his leadership as Opposition Leader Congress will get 30 seats in the next elections.
The leader of the Opposition was felicitated with a memento & shawl. The residents of Chandor, Guirdolim and surrounding areas attended the function in large numbers.