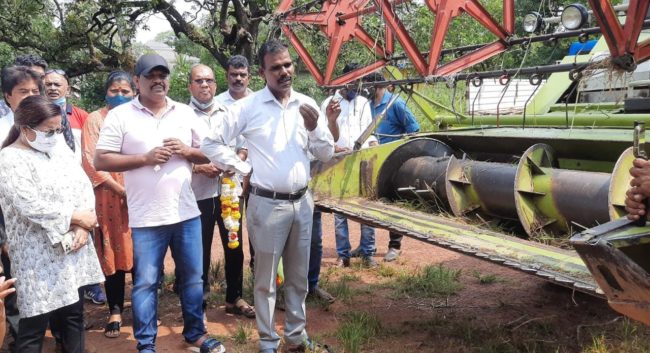 Goemakrponn desk
SIOLIM: A day when the Union Minister Amit Shah is in Goa, the two big leaders of the Bharatiya Janata Party (BJP) clashed over petty issues of harvesting machines.
It is learnt that Minister for Waste Management Michael Lobo, whose wife Delilag Lobo is contesting the forthcoming polls from the Siolim constituency, had brought harvesting machines to be provided to farmers free of cost.
However, this morning some goons came and took away the keys of the harvesting machines.
No official complaints have been filed, but Lobo blamed former MLA and minister Dayanand Mandrekar and his son Sameer Mandrekar of “dadagiri”.
“We got the harvesting machines from Karnataka after making 30-40 calls, but some goons used to power and influence and forcefully took away the machines. We will not retaliate. As people know what has happened”, said Mandrekar.
He said the people have known for the past 20 years, nobody helped the farmers.
“The government was giving machines, and somebody used to come and inaugurate,” he said.
However, he said, it is good to know those leaders have now opened their eyes and announced that they will be giving machines free of cost.
“People know what to do. We know people will stay with us. The farmers did not like what happened. These are desperate attempts to threaten people. By doing Dadagiri, you will not get votes,” Lobo said.
Mandrekar, on the other hand, has rubbished claims saying the keys of machines were taken away by police. A claim was denied by police.

Information should go to public domain after final decision: Lokayukta

Goemkarponn desk PANAJI: Government officials need to understand that once there is a final decision on any subject, nothing remains ... Read More

Combing and search operation in Vasco

Goa Board to declare HSSC results tomorrow at 5 pm

Goemkarponn Desk PANAJI: Goa Board of Secondary and Higher Secondary (GBSHE) today has said that HSSC 2021 results will be declared tomorrow at 5pm. “Goa ... Read More