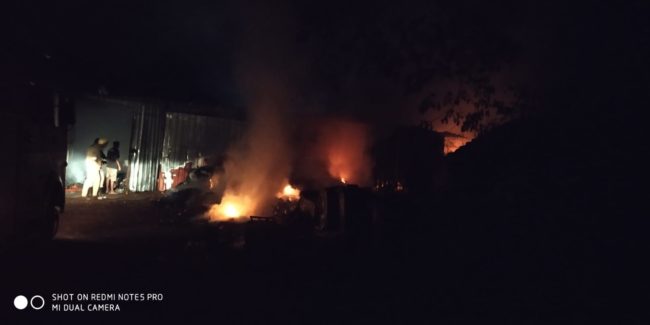 PONDA: Kavlem Panchayat garbage segregation plant shed yesterday midnight caught massive fire, causing a loss of around Rs three lakhs.
The dustbin and the shed were also destroyed in fire. The incident occurred around 11 pm yesterday night, and the fire was doused after fiver hours by a Ponda fire personal using 33000 litres of water with five fire tenders used to douse fire.
Sarpanch Rajesh Kavlekar suspected sabotage and charged that the shed was deliberately set on fire. In CCTV footage movement of one suspect near the garbage plant is seen.

He said some person might have done it out of frustration. He said some locals oppose the proposed Garbage Treatment Plant coming up near Panchayat. This might be the work of people opposing the proposed Garbage plant, he charged.
He said Kavlem Panchayat has no land to set up a garbage plant and recently submitted a memorandum to the governor of Goa for providing land to set up a garbage plant. He said he understands the problems of locals opposing the plant, but Panchayat has to collect garbage as per HC direction. Nobody can oppose the Material Recovery Facility(MRF) set up by Panchayat. Sarpanch said that he would file Police Complaint.

State has no check over student dropout: CAG

Goemkarponn Desk PANAJI: The Comptroller and Auditor General of India (CAG) has slammed educational authorities for Failure to have tracking system in place to check ... Read More

Panaji: While mushrooms have formed a part of our food for many years now, they are still underrated amongst the vast spectrum of ingredients available ... Read More