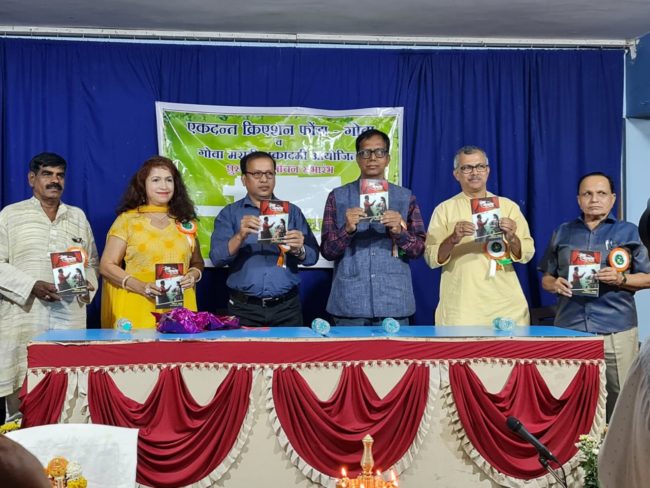 PANAJI: A Konkani Drama book titled Shodh Sukhacho based on family aspects, was released by Shri. Prakash Naik, Information officer of the Department of Information and Publicity, at a function organised by Ekdant Creation Ponda and Goa Marathi Academy at Ponda yesterday.
The Drama Shodh Sukhacho is authored by Shri. Milind Mhadgut a well-known writer and recipient of the Goa State Cultural award.
The function was also graced by Smt Amita Nayak Salatri noted film actor, Milind Mhadgut, Shri Namdev Shet, artist and recipient of State award, Shri. Salu Bhagat Executive Officer of Thrift Co-operative Association and Shri. Mahadev Khanolkar, President of Ekdant Creation Ponda.
Speaking on occasion, Information officer Prakash Naik complimented Shri. Milind Mhadgut for having authored a Drama on family aspects. He described him as a multifaceted personality whose contribution to art, film, literature and education is immense.
Naik said contentment in life is of utmost importance to overcome tension and get the mind’s satisfaction. In this competitive world, we should prepare ourselves to boldly face the challenges ahead of us and live a decent life. In our day to day life, everybody is trying to achieve something, be it wealth and other things but, the real contentment in life, lies in peace of mind , good health and happiness and not wealth 6Shri. Naik said.
Smt Amita Nayak Salatri in her address lauded the contribution of Shri. Milind Mhadgut in various fields and further mentioned that Shri. Mhadgut has carved a niche for himself and has emerged as a versatile personality.
Shri. Milind Mhadgut who has many dramas , films and other publications to his credit explained about the idea conceived by him to pen a Konkani drama book Shodh Sukhacho.
Namdev Shet, artist, spoke on the content of the book Shodh Sukhacho.
Salu Bhagat also expressed his views on the occasion.
Earlier , Mahadev Khanolkar, President of Ekdant Creation welcomed and Miss Prajakta Mhadgut proposed the vote of thanks.
Sandeep Phadte compered.

NEWER POSTTMC, I-PAC were never interested in Goans; what they wanted was power
OLDER POSTSamba Square To Host Pop-Up Bazaar With Local Vendors