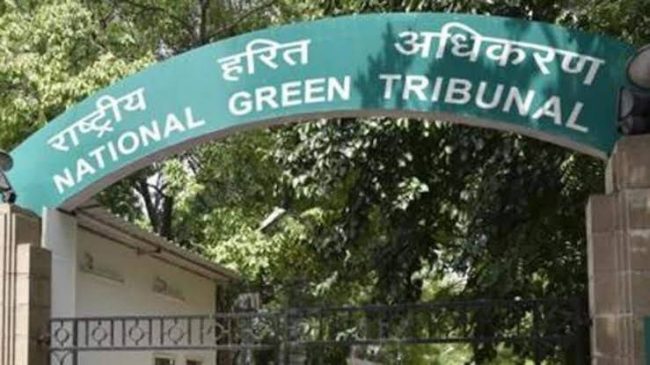 Goemkarponn desk
VASCO: In a major victory for the Villagers of Chicalim, the National Green Tribunal (NGT) on 1st August rejected the appeal of a shipyard and ordered Goa Coastal Zone Management Authority (GCZMA) to restore the illegal reclamation carried out by the shipyard within two months.
A press release issued by Chicalim Villagers action committee ( CVAC ) secretary Rui M. Da Costa Araujo said that NGT has also ordered that the Chief Electrical Engineer has to disconnect the power supply to the violator till the restoration is complete.
“In addition, the Village Panchayat, Chicalim is directed to suspend the trade license of the violator and stop him from carrying on ship repair activity till the execution of work relating to restoration is complete to the satisfaction of GCZMA. The five-member bench of NGT has further stated that since the appellant was permitted to continue activities under an interim order, which are subsequently found to be illegal, the shipyard has to be held liable to pay compensation for the past violations and also to restore the area. GCZMA will also be at liberty to assess and recover compensation for past violations, following due process of law.” said the press note
“The CVAC had been fighting this illegal reclamation for the last ten years and had filed a writ petition in the Goa bench of the Bombay High Court in 2014 against GCZMA and other government authorities for ignoring to take action against the shipyard. The CVAC had taken up with the GCZMA, the Captain of Ports (COP), and the Mormugao Port Authority (MPA) against illegal reclamation of land in Survey Nos.16/6, 16/7 and 72/1 of Village Dabolim in Chicalim Bay of River Zuari carried out by the shipyard and also building an illegal retaining wall in the CRZ-1 area without any permissions from the authorities.” Said the press note
” Upon the complaint lodged by CVAC, the Site was inspected by the Expert
Members of the GCZMA, along with Member Secretary, Goa State Bio-diversity Board (GSBB) and Directorate of Settlement Land Records (DSLR)
on 16.11.2012. There was a further joint inspection by the GSBB and
GCZMA on 07.03.2014 and 20.11.2014.
The DSLR, after due site inspection and verification of the claims of the CVAC, had in its report admitted the said illegal reclamation and claimed that the shipyard had committed encroachment by reclamation in the River Zuari besides also building an illegal retaining wall. ” Said the press note
” The GCZMA had subsequently, upon the directions of the Bombay High Court in CVAC Writ Petition (PIL) No. 11/2014, directed COP with the aid of GSBB to prepare an estimate towards the restoration of the entire illegal reclamation to carry out the same at the cost of shipyard owners. Against his order, the shipyard approached the NGT through Appeal No. 75/2016(WZ). However, with this order, the five-member Bench of NGT has drawn curtains over this long drawn battle in favour of CVAC and the Chicalim villagers.” Said the press note
“Chicalim Villagers have time and again taken up cudgels against illegal activities that threaten to harm the biodiversity of the Chicalim Bay and its ecosystem. This present complaint too was against the shipyard for carrying out the illegal reclamation and construction in the CRZ-1 zone wherein the whole area falls within the mudflats that help breed window pane oysters, also commonly known as ‘Mother of Pearl Oysters” (Placuna Placenta-Linne), which are classified as Scheduled IV species and protected under the Wildlife Protection Act of 1972” added the press note.