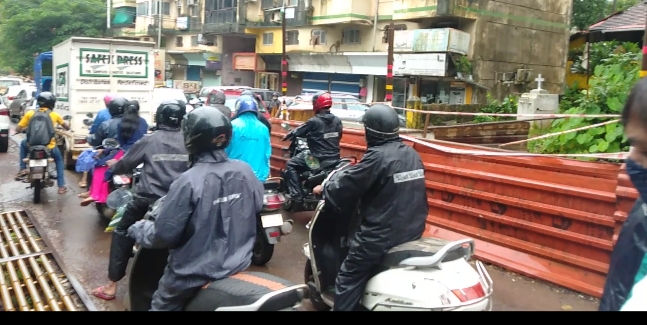 Massive traffic congestion has been witnessed on Ponda-Tisk Junction to Daag-Kavlem road, where sewerage work progresses with huge chambers dug at the roadside.
According to locals, only one traffic police is posted at the junction, unable to manage traffic.
The locals demanded more traffic Police for the smooth flow of traffic on this road.
The Ponda locals said they are facing great hardship because long queues on this road also lead to traffic congestion on Ponda Marago road at Tisk.
Locals said that parking at the roadside and ongoing work on sewerage chambers at the roadside at Daag-Ponda road are causing traffic jams.
Naresh Naik, a local, said he is commuting on this road daily and that heavy traffic congestion is witnessed.
“Only one traffic police is seen opposite the Ponda Court Building controlling the traffic, and he can’t control the traffic. There is a need for more traffic as presently the sewerage work is progressing. To add to the problem, vehicles are parked on the roadside near the government building at Tisk-Ponda,” he lamented.
On account of sewerage work presently, the Daag-Ponda road is closed for heavy traffic, and only four-wheelers and bikes are seen travelling on the road.
Locals say the road condition is worst as they are dug for sewerage work.
The passenger buses on Ponda –Marcaim road are diverted via Dhavlim. However, despite this, the road at Tisk Ponda and Daag Ponda is congested with traffic.
Locals said traffic police are often seen busy issuing challans and fail to clear traffic congestions.
When contacted, the Ponda Traffic official said he would look into the matter and solve the issue at the earliest.