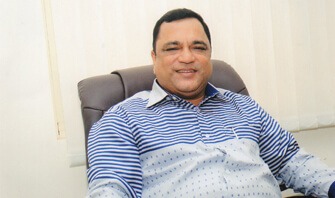 Goemkarponn desk
VASCO: Panchayats Minister Mauvin Godinho showed strength after taking control of both Chicalim and Bogmalo panchayats falling under the Dabolim constituency.
While six members backed by Godinho won in the 11-member Chicalim panchayat, 5 candidates backed by him swept the Seven member Chicolna Bogmalo panchayat.
While six-term panch member and former Sarpanch Laxman Kavlekar faced defeat in Bogmalo panchayat, Shital Pereira, the wife of outgoing Chicalim Sarpanch Seby Pereira, lost the elections as Godinho-backed panel of candidates swept both the panchayat bodies.
Aishwarya Thorat (22), the daughter of Sancoale ZP Anita Thorat, was the youngest candidate of the Godinho’s panel and won the election from Bogmalo Panchayat.
Former Chicalim Dy Sarpanch Kamla Prasad Yadav got all four members of his panel elected from the Dabolim area and contributed to the Mauvin Godinho panel of six candidates in the Chicalim panchayat.
Yadav, who is a strong supporter of Godinho, had got his panel of three candidates elected even during the last panchayat elections from Dabolim
Yadav speaking to reporters, said that he was supported by Godinho and also by his friend Vasco MLA Krishna Salkar.
“I am not interested in any post because our main agenda is only development works and people vote for us based on our works. We are from the BJP party, and I will accept any decision taken by Panchayat minister Mauvin Godinho or the BJP party. I have born here, and I have a love for my area, and this has led us to take a lot of visible development in our area with the support of Godinho,” said Yadav.
Former Dy Sarpanch of Bogmalo Panchayat Arun Naik, who defeated heavyweight Laxman Kavlekar, said that he had seen Kavlekar as the Sarpanch since his childhood.
“It feels like an achievement for me to have defeated such a heavy weight, and this would not be possible without the support of Godinho,” said Naik
Another youth Sankalp Mahale said that he had contested from another ward, and several tactics by the opposition of using religious lines had failed and got him elected.
The winners of Bogmalo Panchayat are Lorena Cunha ( ward 1 ), Caetano Figueredo ( ward 2), Antonio Fernandes ( ward 3 ), Sankalp Mahale ( ward 4 ), Cynthia Rodrigues ( ward 5 ), Aishwarya Thorat ( ward 6 ) and Arun Naik ( ward 7 ).
The winners of Chicalim Panchayat are Maria Mascarenhas(ward 1), Neelam Naik(ward 2), Sunita Yadav( ward 3 ), Dattaprasad Bandodkar( ward 4), Kamla Prasad Yadav( ward 5), Sapna Kurade( ward 6), Shailesh Mayekar(ward 7 ), Francisco Nunes(ward 8), Poonam Chari ( ward 9), Aishwarya Korgaonkar(ward 10) and Roman Vaz( ward 11).