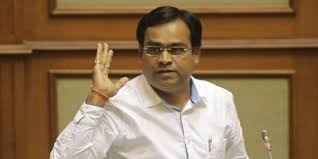 Goemkarponn desk
BICHOLIM: The Maharastrawadi Gomantak Party (MGP) today stated that they would win the Bicholim seat and that former MLA, Naresh Sawal would be their candidate.
Speaking to media persons, the president of the party, Deepak Dhawlikar told that their party has a strong face for election and they would win the Bicholim seat.
“During the last election, we lost in Bicholim with just about 500 votes now we are sure of winning this election in Bicholim with a margin of about 5000 votes,” Dhawlikar told.
He said that his samiti is very strong and can contest the next election and win in the state. “Naresh Sawal is with us, and we have a good strategy to win this election.” He told.
Meanwhile, the party submitted a memorandum to the deputy collector demanding streamlining online education in the state.
Speaking to media persons, the president of the party, Deepak Dhawlikar told that the government is least bothered about the children’s education.
“We have submitted a memo which is referred to the CM so that the rural children could get the facility of online education. There is no range, children do not have mobiles, and many have lost their jobs. The government has not seen what will be the effect of online education,” Dhawlikar told.
He suggested that the government give students mobiles as earlier there were schemes of providing laptops to children, uniforms, books. He questioned whether the government is not having a scheme of providing mobiles to students.
“Since last two years, the schools are closed. What is the government doing for the last two years?” he asked, adding, “the CM has no attention towards education.”
He asked the government to give facilities and then demand online education.