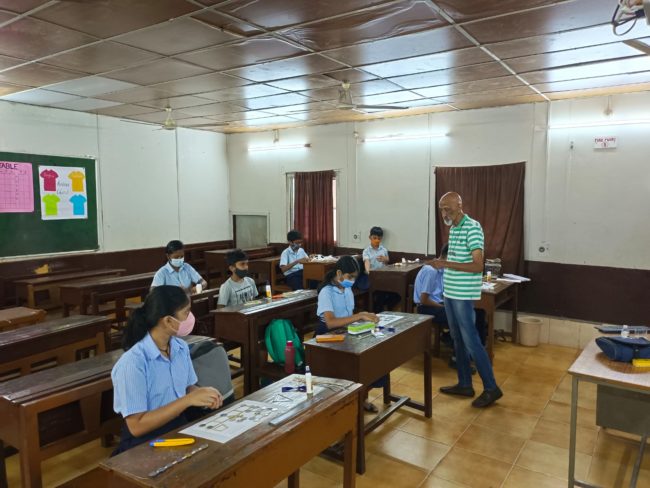 VASCO: National Level Rubber Powered Aeromodelling Postal Contest is being held in Chicalim Navy Children’s School.
Rtr.Commander Anant Narayanan said “we have come up with a postal rubber powered aeromodelling competition for the first time in India. This is a common design aeromodelling competition of making a rubber powered plane and flying it for the maximum possible duration. You can participate as an individual or in a group of 2 people.”
On registration and approval of the same, you will receive one rubber powered aircraft kit, which you will assemble. The assembled aircraft needs to be properly trimmed to achieve the maximum flight time. You will have to make a video of your flight and send it to us. He added that the participant whose aircraft flies for the maximum duration will win the contest.
He further said that the National level Aero modelling postal contest for a rubber-powered plane-making camp was held in Navy School Chicalim. This contest is being organised all over India, and Goa is the second highest in terms of participants participating in this contest, with 35 students. He said that the Aeronautics area will boom in the coming years, and considering this, students should learn and generate interest in this field.
A student from the Navy School of Chicalim said that it is very interesting to learn and know about Aeronautics and aeromodelling. We are being trained and taught about making rubber powered paper planes by Rtr Commander Narayanan” he said.

In a record, the Directorate of Fire & Emergency Services received 269 emergency calls from across Goa

Flood-like situation in parts of Quepem and Curchorem

Goemkarponn desk QUEPEM: Non-stop rainfall in Quepem and Sanguem taluka has led to water-logging in most areas. Uninterrupted heavy rainfall, which continued for the past ... Read More