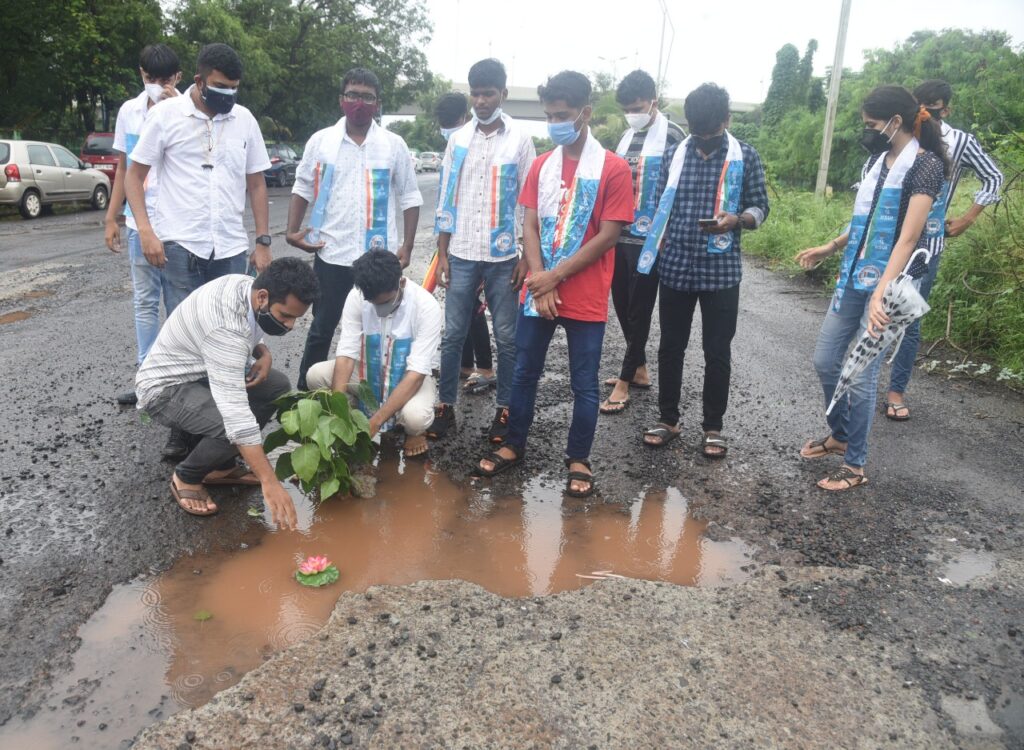 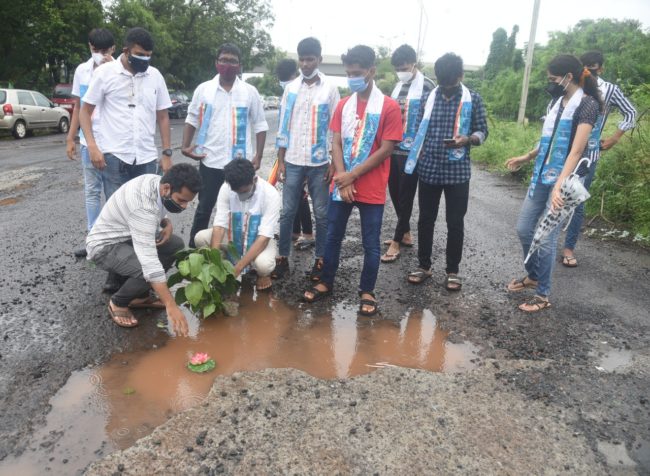 Panaji: NSUI GOA had organised a protest at Patto plaza, Panjim today (15th July) demanding safety for the Goan commuters & planted a lotus in the potholes.

In the protest their core goal to highlight the shortcomings of the BJP governments PWD ministers where he said that All pending Roads in goa will be done by 31st May 2021 with 10 years guarantee. “More than a month has passed and the roads are still not repaired” said NSUI President Naushad Chowdhari

Naushad said even though Panaji is a smart city the roads are in dilapidated conditions and that BJP government who takes out tenders every year to take 30% commission due to which road conditions are very bad. Also he mentioned that governments excuse for increase in the fuel prices is to in courage Electric Vehicles is a laughable and they’re are making a mockery of the people, further stating that to cover up the ill conditions of roads they might start giving tax cuts on boards and Kayaking. “Since roads are flooded with water government instead of repairing roads might give tax relief on boats and kayak” said Naushad.

Naushad also asserted that during road safety week the government should assess the condition of road and not merely teach public about road safety.

General Secretary Prasanjeet Dhage said that PWD minister Mr.Pauskar’s promise to Goans is gone down the drain and because of the media asking him about the promise he is giving vague reasons about incomplete work on roads .

He said that the due to lockdown there is a void in the workforce and this void should be filled by Goans. “PWD minister who says work is incomplete because he is not getting workers during the pandemic should hire Goans and complete the work”

He further stated that in Article 38 of Constitution says that state shall endeavour to promote welfare by making political, economic & social developments but in Goa the state doesn’t even meet basic necessity like water, electricity & roads. He also said Who will be responsible for safety of people in case of accident? “The traffics police stop commuters if they don’t wear helmet and if questioned about road conditions they say that’s not a concern of their department. So the department responsible (PWD) should take cognisance of the same.”

Naushad has given 15 days ultimatum to Government to repair the potholes else they will come out in huge numbers on the road to protest.