Once DOMINATING, challenging times for BJP in MORMUGAO now 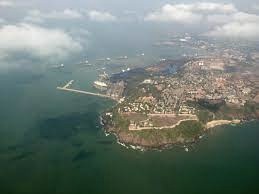 MORMUGAO: The omnipresent and omnipotent Bharatiya Janata Party (BJP), which once claimed to be in the four constituencies of Mormugao taluka, seems to have received a sucker punch from its own people recently. This time it is undeniable that BJP will have a tough time to emerge victorious as the people’s sentiments are against the BJP, and they are eyeing for an able option to bring Acche Din.
Assembly elections are slated for February 14, and the political parties are busy in their door to door campaigning and running around in each constituency meeting people and assuring them the “Acche Din”, which the people dream about for several years. Mormugao taluka, which houses major installations, airports, ports, industrial estates, fuel storage etc, makes it an important taluka in Goa.
Last assembly election in all four constituencies of Mormugao taluka, BJP emerged victorious in all four constituencies.
In Cortalim Alina Saldhana, in Dabolim Mauvin Godinho, in Vasco Carlos Almeida and in Mormugao Milind Naik won on BJP ticket. From these, Mauvin and Milind went on to become ministers in the cabinet. Others two MLAs were given corporations to run.
But, in the recent past, things changed drastically, the controversies which encircled BJP and its MLAs were too big to be neglected, and the Goans all over have been observing it quietly.

Mormugao
Mormugao MLA Milind Naik has been winning several times in the constituency, but the situation is different this time around.
During his tenure, he managed to give public sector jobs to his voters, but not all people from his constituency are happy; there is still the problem of unemployment, coal pollution, water shortage, cellular connectivity, improper drainage system, parking issue and many more unresolved issues.
Above all, the SEX SCANDAL, has undone whatever little work he has done.
This constituency has been a strong supporter of the BJP party, and this has come as an added advantage to the Naik last election. But this time, there have been a series of controversies that have created hurdles before Naik.
The recent alleged sex scandal, unmanned Nu Shi Nalini vessel with slug, a verbal argument with a councillor, politics during MMC chairperson appointment, Restoration of heritage municipality building etc., are some controversies that have put Naik in the danger zone.
This time whether Milind Naik will get a BJP ticket is also questionable.
On the other hand, Congress party candidate Sankalp Amonkar has been trying desperately to gain the people’s trust by raising several public centric issues and showing his presence in the public domain.
But whether these efforts will fetch some more votes is a question mark. Other political parties such as Aam Aadmi Party, Trinamool Congress and other parties have been busy doing their campaigning. With many people contesting on different parties, secular votes will get divided for sure.

In Vasco constituency, with BJP’s Carlos Almeida, who was a two times MLA now going to Congress, will surely impact the party. In Vasco, Krishna (daji) Salkar, who had contested against Almeida last time and lost with a thin margin, is now likely to contest on BJP ticket.
A huge crowd is being seen in the public meetings of Salkar. Salkar has been active in the social field too. But considering Vasco’s diverse vote bank and secular votes, one shouldn’t underestimate Almeida as he has got his vote share too in the constituency.
Almeida has also been actively helping people during the Covid19 pandemic time and has been pursuing various projects from Vasco, although it is a different story that some major projects never got completed due to no support from the BJP govt which the Almeida have been claiming recently.
Although Congress has not declared its candidate in Vasco, chances are high that Almeida will bag the ticket.

In the Dabolim constituency, too, it won’t be an easy fight for BJP, as the Nationalist Congress Party leader Jose Philip Dsouza, Congress’s Captain Viriato Fernandes, AAP candidate Babu Nanoskar etc. are trying hard to reach out to people through their door to door campaign, corner meetings in the constituency.
Panchayat minister Godinho won last time by defeating Babu Nanoskar, and Babu has expressed his confidence that he has a chance of winning this time. But on the other side, Jose Philip Dsouza, NCP leader, seems to have shifted his gear from alliance to “Ekla Cholo re” and has been seen campaigning in the Dabolim constituency. Dsouza has also claimed that he has a huge vote bank in the Dabolim constituency and has the potential to win this time. Captain Viriato Fernandes, a well-known activist who has been active in the public domain, is also trying his luck in the Congress party and has seen busy in campaigning.
Whereas Minister Mauvin was recently inaugurated, laying foundation stones of some projects, and organised various public events in his constituency.

In Cortalim constituency, former BJP MLA Alina Saldhana leaving the BJP and joining AAP will greatly impact BJP.
With now Panchayat minister Godinho portraying Girish Pillai as a Cortalim candidate, there are likely chances that Godinho might recommend Pillai’s name for BJP ticket considering the Non-Goan population in the Cortalim, Sancoale areas.
But here, Cortalim BJP Mandal is unhappy over the minister’s projection of Pillai as a Cortalim candidate, and the Mandal has opined that they will decide the BJP candidate. There are other candidates like Anton Vaz who had contested independent last time, and this time too, he is likely to challenge, but whether he will contest on any party ticket or independent will also make a difference in this constituency considering his popularity his rapport with the people.
The crux of the story is that BJP will not have the cakewalk in Mormugao taluka in this election, but the party will have to slog itself to win all seats in all four constituencies.
The BJP and several other parties are yet to officially declare their candidates, and after the official declaration of candidates in the coming days, the political situation might see the change

Govt to lift moratorium on recruitments from Dec 1: CM

Chief Minister Dr Pramod Sawant today said that the state government will lift the moratorium on recruitments in the department from December 1. Sawant also ... Read More

Goans will soon remove the Power Plug of this corrupt, anti-people Government