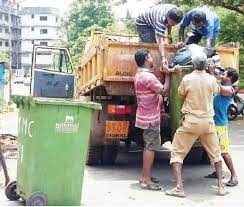 Goemkarponn desk
BICHOLIM: The Cold War between ruling and opposition Sanquelim Muncipal councillors is out in the open with the BJP supported panel making major allegations against the ruling council.
The Opposition has alleged that the municipal workers had not been paid for the last three months even though the ruling councillors refuted the charges.

The BJP councillors, through a press conference, have stated that the ruling council is harassing the municipal workers and have not been paid their salary for the last three months.

“The chief officer has already signed the salary vouchers, but the chairman is not releasing the money. When we were ruling, we had arranged the staff’s salary till December, but we don’t know why the ruling councillors are not being paid”, Councillor Yeshwant Madkar said.

“We denounce the actions of the councillors as most of the workers are totally dependent upon this salary. The labourers are on daily wages, and today even after nine days, they are not paid. Nowhere it is mentioned that the panel can stop the payment of the workers,” Madkar told.

In reply to this, the SMC chairman, Raya Parsekar, has refuted the charges and has asked the BJP to study the matter. “We want to state that only one month salary that of June is kept pending, but today morning itself I have released the same,” Parsekar told.