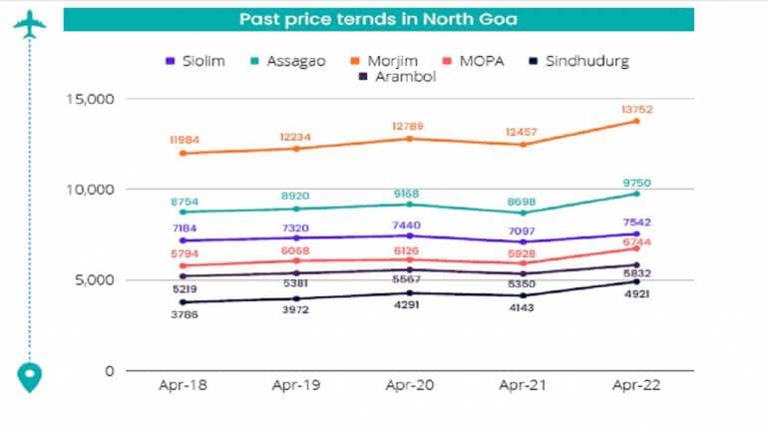 Goemkarponn desk
PERNEM: Property prices close to the airport are currently at Rs 6,700 per sq ft., and these may increase by 27.8 percent in the next 12 months. In the past four years, average property prices have risen at a CAGR of 3.9 percent , as per a research by 360 Realtors.
Citing another example, the firm said that in the adjacent Sindhudurg region, which is also a sought-after second home and nature resort destination, average property prices might increase by 29.2 percent annually. Presently, the average price is Rs 4,921 per sq ft. Over the past four years, average property prices in Sindhudurg have grown at a CAGR of 6.8 percent.
The positive impact of the MOPA mega project may cascade to other nearby regions such as Morjim, Assagao, Siolim, etc where the real estate demand will receive a boost, it said.
Apart from tourism, the Rs 2,600 crore airport project will directly and indirectly fuel real estate demand in the MOPA region, wider North Goa, and the nearby Konkan region. Already 232 acres of land have been earmarked near the airport site to be developed into a commercial, logistics, and residential market. The planned project will consist of 5-star hotels, offices, retail shops, malls, and much more.
Goa’s only existing airport in Dabolim is located in a military airfield owned by the Indian Navy. The combined flow of civilian and military traffic on the single-runway increases the airside congestion. The MOPA airport aims at enhancing Goa’s connectivity by air, by aiding the flow of civilian traffic to the state.
The airport, which is being built under the BOT model (Build, Operate and Transfer) will be operated through GGIAL by GMR for a period of 40 years, extendable by 20 years, as per broad lease agreements.